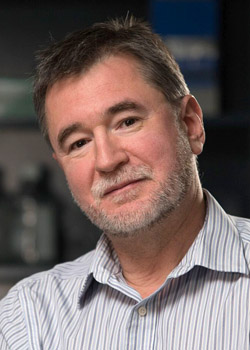 Zoran Galic, PhD, is a molecular biologist and associate professor in the Department of Medicine, Division of Hematology/Oncology at the David Geffen School of Medicine at UCLA. He currently serves as director of the UCLA Flow Cytometry Core Facility and co-director of the UCLA/CFAR Gene and Cellular Therapy Core Facility, and is a member of the International Society for Stem Cell Research.

Galic earned his BS degree from the University of Sarajevo in Biology in 1988, and his PhD degree from the University of California, Los Angeles, in Molecular Immunology in 1999. At UCLA, Galic was a research scholar and graduate student researcher (1990–1999), and a postdoctoral fellow (1999–2004). He joined the UCLA faculty as an assistant professor in 2007, and rose to the rank of associate professor in 2014.

The research in Galic’s laboratory is focused on modeling hematopoiesis from human pluripotent stem cells and human hematopoietic stem cells. Current goals include improving the function of the immune system by genetically engineering stem cells to produce individual blood cell types with increased abilities to fight cancer and other infectious agents, and to prevent autoimmune diseases. He pioneered human embryonic stem cell (hESC) research at UCLA and was the first to publish protocols for differentiation of hESCs into T lineage cells.