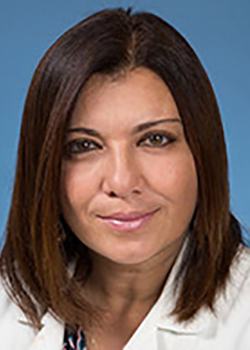 St. John earned her BS degree from Stanford University in 1992, and her PhD degree from Yale University School of Medicine in 1999 as part of the Medical Scientist Training Program. At UCLA, she was a research scholar and graduate student researcher (1999–2004), and a postdoctoral fellow (2003–2004) with Dr. Steven Dubinett, current director of the lung cancer research program at the Jonsson Cancer Center. Board certified in otolaryngology, St. John joined the UCLA faculty as an assistant professor in 2006, and rose to the rank of Chair in 2017.

St. John’s professional and administrative experience includes appointments to the American Head & Neck Society Program Advisory Committee (2008–present), the American Academy of Otolaryngology Head & Neck Surgery Task Force (2009–present), the Triological Society National Nominating Committee (2015), and research grant review committees for the National Institutes of Health, the National Cancer Institute, the Eastern Cooperative Oncology Group and the National Institute of Biomedical Imaging and Bioengineering. She has moderated national and international meetings, and served as a program committee member for the Triological Society Combined Sections Meeting (2017), the American Society for Radiation Oncology AHNS-ECOG Meeting (2017) and the Multidisciplinary Head and Neck Cancers Symposium (2018). St. John is also a member of the American Association for Cancer Research, the Triological Society and the SUO Leadership Society.

The research in St. John’s laboratory, which is funded by the National Cancer Institute and the National Institutes of Health, is focused on identifying novel diagnostic and treatment modalities for head and neck squamous cell carcinoma. St. John publishes extensively, and is a widely recognized mentor and educator on issues related to clinical research in head and neck cancers.

St. John has received numerous honors for her work as a physician and scientist, including the Head and Neck Triological Society Honor Award, the Most Outstanding Head & Neck Surgery Faculty Award, the EAO Young Leadership Award (2008), the Los Angeles “Superdoctor” in otolaryngology by Los Angeles Magazine (2010–present), and the UCLA Health System Humanism Award for two consecutive years (2011–2012). She was also named UCLA Exceptional Physician in 2015, as one of the top three physicians at UCLA.