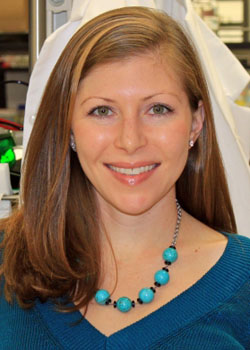 Heather Christofk, PhD, is a renowned biochemist, and associate professor in the departments of Biological Chemistry and Molecular & Medical Pharmacology at the David Geffen School of Medicine at UCLA. She is a Searle Scholar and has received numerous honors for her research, including the Damon Runyon-Rachleff Innovation Award, the NIH Director’s New Innovator Award and an American Cancer Society Research Scholar Award.

Christofk earned her BS degree from the University of California, Los Angeles, in Molecular, Cell and Developmental Biology in 2001. She earned her PhD degree from Harvard University in 2007 under the mentorship of Dr. Lewis Cantley, current Director of the Sandra and Edward Meyer Cancer Center at Weill Cornell Medical College. Christofk was a research associate with Dr. Hong Wu (2001–2002), and a postdoctoral fellow at University of California, San Francisco with Dr. Frank McCormick (2007–2008). She joined the UCLA faculty as an assistant professor in 2008, and rose to the rank of associate professor in 2016.

The research in Christofk’s laboratory, which is funded by the National Cancer Institute and the National Institutes of Health, is focused on how metabolism is regulated in normal and cancer cells, and what nutrients are required for tumor growth.  She has discovered key enzymes involved in promoting metabolic alterations in tumor cells, and critical nutrients for tumor growth. Her lab is now exploring ways to block this altered tumor metabolism as a cancer treatment strategy.

Christofk publishes extensively and is a widely renowned teacher and speaker on issues related to metabolism and cancer. She has multiple patents or patent applications arising from her research and consulting activities.