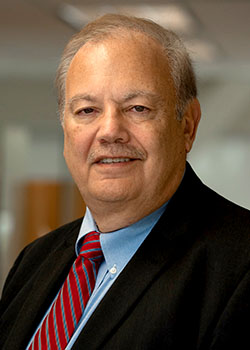 For 12 years, Slamon and his colleagues conducted the laboratory and clinical research that led to the development of the new breast cancer drug Herceptin, which targets a specific genetic alteration found in about 25 percent of breast cancer patients. To acknowledge Slamon's accomplishments, President Clinton appointed Slamon to the three-member President's Cancer Panel in June 2000.

Slamon has won numerous national research awards honoring his scientific endeavors. In 2019, Slamon was awarded the Lasker-DeBakey Clinical Medical Research Award for the groundbreaking development of Herceptin. The Albert and Mary Lasker Foundation honored Slamon and colleagues H. Michael Shepard and Axel Ullrich for demonstrating that monoclonal antibodies were a viable and effective strategy to treat solid tumors, opening a new path to develop and deploy antibodies to treat cancer.

In 2000, Slamon was awarded the Translational Medicine Award by the USCD-Salk Institute as well as the Bristol-Myers Squibb Oncology Millennium Award for significant achievement and leadership in breast cancer research. In 2001, Slamon was awarded the Wadsworth Center's Brown-Hazen Award for Excellence in the Basic Sciences, and in 2002, he received the Jeffrey A. Gottlieb Memorial Award from the MD Anderson Cancer Center in Texas. In 2003, Slamon received the Dorothy P. Landon-AACR Prize for Translational Cancer Research, an international award given by the Kirk A. and Dorothy P. Landon Foundation and the American Association for Cancer Research. In 2004, the American Cancer Society presented Slamon with the Medal of Honor, the top award bestowed by the organization. In 2005, Kent State University in Ohio gave Slamon the Fifth Aultman Cancer Center Award and he also received the Distinguished Service Award from the Medical and Biological Sciences Alumni Association at the University of Chicago. That same year, he received the William McGuire Memorial Award at the San Antonio Breast Cancer Symposium.

In 2006, Slamon was honored with the American Society of Clinical Oncology’s David A. Karnofsky Memorial Award and Lecture. Also in 2006, Slamon received the 18th Annual Donald Ware Waddell Award from Arizona Cancer Center; the European Institute of Oncology Breast Cancer Award; the 2nd Umberto Veronesi Award for the Future Fight Against Breast Cancer and the Lister Award for Translational Medicine from the University of Glasgow, Scotland. In 2007, Slamon received the 19th annual Warren Alpert Foundation Scientific Prize, awarded by Harvard Medical School. Also in 2007, he received the Friends of the National Library of Medicine Distinguished Medical Service Award and the Gairdner International Award, one of the most prestigious awards in biomedical science.

In 2008, Slamon received the Daniel Nathans’ Memorial Award from the Van Andel Research Institute, and the following year, he was honored with the Medical Science Award by the UCLA Medical Alumni and Aesculapians, the Milken Family Medical Foundation Award in Cancer Research, and the Upjohn Award in Internal Medicine and the Outstanding Young Investigator Award. In 2019, the Royal Swedish Academy of Sciences and Sweden’s Sjöberg Foundation named him a co-winner of the 2019 Sjöberg Prize for his groundbreaking research in the development of successful targeted cancer therapies.