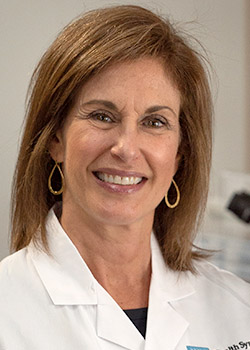 Beth Y. Karlan, M.D., is an internationally recognized expert in ovarian cancer and other heritable cancers with a 30-year career as a physician and scientist. She is Vice Chair of Women’s Health Research and professor in the Department of Obstetrics & Gynecology at the David Geffen School of Medicine at UCLA, and currently serves as director of the UCLA Jonsson Comprehensive Cancer Center’s Cancer Population Genetics program.

A board-certified gynecologic oncologist and physician-scientist, Karlan’s research and clinical practice focus primarily on ovarian cancer and investigating pressing clinical and translational questions related to the disease. Her research seeks to understand the genetic and phenotypic determinants of ovarian cancer, hereditary predisposition to cancer, and molecular biomarkers for early detection, treatment and prognostication of ovarian cancer. In 1989 she established a human tissue biorepository that became one of the largest collections of fresh frozen tissue, serum, and germline DNA with correlative data from women with ovarian and other gynecologic cancers. This resource has been widely used in many national and international translational research studies, including The Cancer Genome Atlas project (TCGA), Consortium of Investigators of Modifiers of BRCA1/2 (CIMBA) and Ovarian Cancer Association Consortium (OCAC).

Karlan publishes extensively, and is Editor-in-Chief of her specialty’s two pre-eminent journals Gynecologic Oncology and Gynecologic Oncology Reports. Her work has resulted in multiple federal and foundation funded research grants that have advanced our understanding of hereditary cancers related to BRCA1/2 mutations. She currently is a Co-PI on a large national project focused on a population-based genetic testing model of individuals at risk for BRCA1 and BRCA2 mutations. In 1991, Karlan’s interest in inherited cancers led her to initiate the Gilda Radner Hereditary Cancer Program which over time has become a renowned resource providing data to help identify precursors to cancer, epidemiologic and lifestyle risk factors regarding cancer risk, and correlative specimens for biomarker identification for early detection. More recently Karlan’s translational interests have focused on contributions of the tumor microenvironment to ovarian cancer precursors and metastasis, as well as the roles of key molecular regulators driving cancer biology.

In addition to her leadership roles at UCLA, Karlan has served as president of the Society of Gynecologic Oncology and is currently Chair of the Scientific Advisory Committee for the Ovarian Cancer Research Alliance. She is a member of the National Academy of Medicine, an American Cancer Society Clinical Research Professor and a Fellow of the American Society of Clinical Oncology. She has provided congressional testimony advocating for federal support of ovarian cancer research and helped lead an effort that achieved passage of the Gynecologic Cancer Education and Awareness Act of 2005 or “Johanna’s Law.”  In 2012, Karlan was appointed by the White House to the National Cancer Advisory Board, and in 2019 she received the Giants of Cancer Care Award.