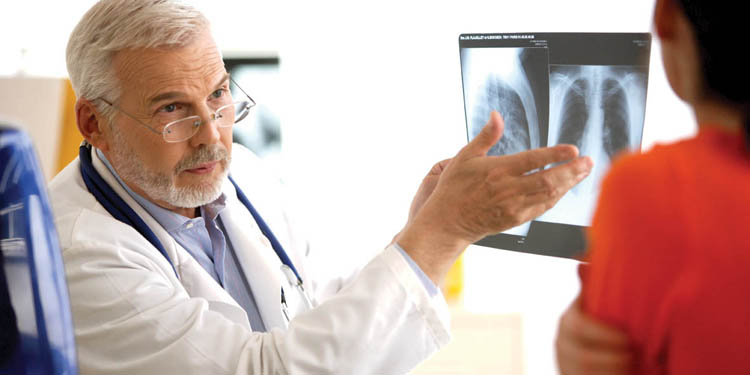 Lung cancer is the leading cancer killer in both men and women in the United States, and causes more deaths than the next three most common cancers combined. Although cigarette smoking is the main cause, anyone can develop lung cancer.

At UCLA, lung cancer care is facilitated by the Lung Cancer Program. A multidisciplinary team of experts is dedicated to the prevention, detection, treatment and research of lung cancer.

What is Lung Cancer?

The lungs contain many different types of cells. Most cells in the lung are epithelial cells. Epithelial cells line the airways and produce mucus, which lubricates and protects the lung. The lung also contains nerve cells, hormone-producing cells, blood cells and structural, or supporting, cells.

Lung cancer begins when cells in the lung grow out of control and form a mass (also called a tumor, lesion or nodule). A cancerous tumor is a collection of a large number of cancer cells and appears as a mass within the lung tissues. A lung tumor can begin anywhere in the lung. 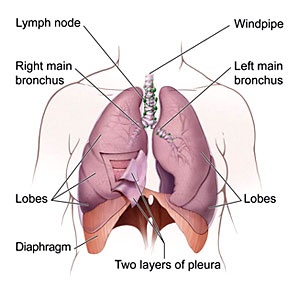 Once a cancerous lung tumor begins to grow, it may or may not shed cancer cells. Shed cells can be carried away in blood, or float away in the natural fluid, called lymph, that surrounds lung tissue. Lymph flows through tubes called lymphatic vessels, which drain into collecting stations called lymph nodes. Lymph nodes are located in the lungs, in the center of the chest and elsewhere in the body. The natural flow of lymph out of the lungs is toward the center of the chest, which explains why lung cancer often spreads there. When a cancer cell leaves its site of origin and moves into a lymph node or to a far away part of the body through the bloodstream, it is called metastasis.

The location and size of the initial lung tumor and whether it has spread to lymph nodes or more distant sites determines the stage of lung cancer. The type of lung cancer and stage of the disease determine what type of treatment is needed.