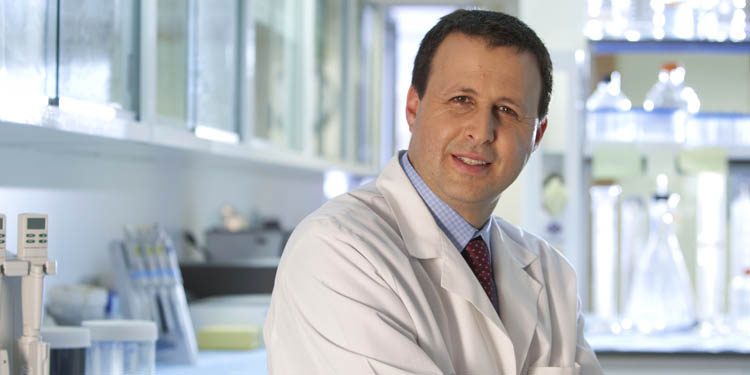 Richard Finn was a senior in high school and thought he knew exactly where his life was headed. He planned to attend the University of California, San Diego, and study to become an electrical engineer like his father.

Then cancer threw a wrench into his plans. The spring of his senior year, his mother was diagnosed with breast cancer. The youngest of three siblings and the only one still living at home, Finn spent a lot of time taking care of his mother that spring and summer, accompanying her to her medical appointments.

“During that time I was struck by the impact that a doctor can have on a patient and their family,” said Finn, an assistant professor of hematology/oncology and a researcher at UCLA’s Jonsson Comprehensive Cancer Center. “There was so much compassion.”

In the fall, Finn went off to school in San Diego as planned. But his mother passed away that December, so he transferred to UCLA to be closer to his family in Torrance. His brother-in-law was in the university’s Medical Scientist Training Program, and the idea of doing medical research began to creep into Finn’s mind.

It was an exciting time in cancer research particularly. A prominent UCLA physician scientist, Dr. Dennis Slamon, was doing groundbreaking research on a type of breast cancer known as HER-2/neu positive, an aggressive and deadly form of the disease for which there were no effective therapies. The work was translational, taking leading-edge basic science findings and applying them in the clinic, another aspect of the work that appealed to Finn. He decided that this was what he would do – cancer research.

The disease, it seemed, had changed his life’s course.

Finn landed a position in Slamon’s lab and spent the next several years working for him while he finished his undergraduate studies.

“It was a great experience,” Finn said. “We were working to find antibodies against HER-2 and it really motivated me to become an academic oncologist and work on new and more effective therapies to fight cancer.”

Finn left UCLA to attend medical school at USC, but he kept in touch and continued to work in the lab during the school years and summers. He returned to UCLA for his residency and fellowship and joined the faculty in 2002. He specializes in breast and liver cancers, spending about 20 percent of his time in the clinic seeing patients and 80 percent in the lab.

“It’s been an amazing experience,” he said. “I’ve been very fortunate to have a good, strong lab background and good clinical training at UCLA. It’s exciting to be working to bring novel therapeutics to patients as soon as possible."

Finn and his team are looking to find molecular alterations like HER-2 in other cancers, so targeted therapies can be developed to home in on the cancer cells and leave the healthy tissue alone. They’re also looking for predictive markers that will tell doctors which treatments patients will respond to and which won’t work.

“The real challenge for translational researchers is to find which patients will respond to which drugs, and get the right drugs to the right patients, providing treatments that are more effective and less toxic.”

Currently, Finn is directing a translational oncology core lab for cancer investigators set up to evaluate novel therapeutics. The focus is across all solid tumor types with a goal to identify subtypes within the cancers that have different molecular characteristics, and would therefore respond differently to different therapies. That information would then be used to design clinical trials of novel therapeutics, armed with the predictive information obtained in the lab.

To say he’s happy in his work would be an understatement.

“I’m ecstatic,” he said. “The whole idea of being able to see some observation in the lab brought to clinic with potential benefit for patients is exciting. Basic science is very important. Pure clinical science is very important. I get to walk the line between the lab and the clinic. I get the immediate gratification of patient care, but I also get the long term satisfaction of doing basic research. In the long run, if we’re successful, that will have a huge impact on a greater number of people.

“What drives me is just the idea of helping people with this horrible disease," he continued. "There’s so much to be done. I think patients are always amazed by how little we have to offer, especially to patients with advanced cancer. Very few of them can be cured now.”

When he’s not in the lab or in the clinic, Finn is a family man and likes to spend time with his wife of nine years and their children. He’s got a son, 6, and a daughter, 4, with a third child on the way. Friday night family dinners are sacred and he’s happiest just hanging out at home.