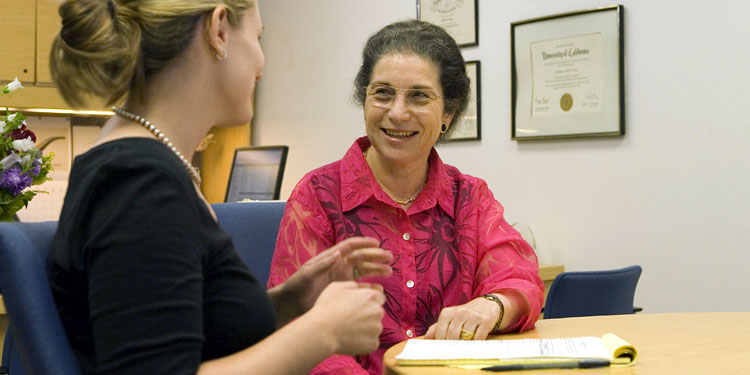 For two decades, Dr. Patricia Ganz has conducted ground-breaking research that has changed the face of cancer survivorship.

A founding member of the National Coalition of Cancer Survivors, Ganz is considered the top national expert on quality of life after breast cancer, and her leading-edge studies have changed the way the medical field views the post treatment health problems faced by millions of former patients nationwide.

In October 2007, Ganz received the American Cancer Society’s Distinguished Service Award, an honor that recognizes outstanding contributions in the field of cancer.

And to think that it all might have never happened. After completing medical school, Ganz had her mind set on becoming a cardiologist.

Call it destiny or fate, but a rotation through medical oncology changed everything. It was 1973, two years after President Richard Nixon declared a War on Cancer. Cisplatinum was saving the lives of young men who had been dying of testicular cancer. Oncology, Ganz thought presciently, was a field in which she could make a real difference.

“I had the naïve hope that we were on the road to a cure for cancer,” said Ganz, director of the division of cancer prevention and control research at UCLA’s Jonsson Comprehensive Cancer Center. “For me, there was so much more hope in cancer care. And it was much more challenging in terms of prevention.”

Ganz grew up in Beverly Hills, the daughter of a physician and a homemaker who later ran a family business. The oldest of two children, Ganz attended Harvard and majored in biology, hoping to become a researcher. She spent her summers working in UCLA laboratories. In her third year of college, Ganz decided to attend medical school at UCLA. She was one of only three women in a class of 120 medical students.

Once Ganz decided on oncology, she focused on quality of life in cancer patients and survivors, something no one else was doing. In 1978, after she completed her residency, Ganz choose to work at the West Los Angeles VA Medical Center, where she opened a hospice center to provide palliative care to patients from diagnosis until death. Instead of focusing on the last few weeks of life, Ganz and her team provided multidisciplinary, symptom-focused care from diagnosis on.

Ganz realized at this early point in her career that doctors shouldn’t wait until the end of life to manage pain, address fatigue or help patients with psychological distress.

“We needed to do that while they were still in treatment,” she said.

Her work focused not only on their physical symptoms, but also on their emotional, nutritional and psychological needs. She launched support groups to help patients cope with their disease.

“I recognized that we had to take care of all of a patient’s needs, not just their medical treatment,” she said. Ganz teamed up with a psychiatrist and a psychologist and, using grant money, they launched a program to determine the needs of cancer patients during and after treatment.

That work led to other grants and more research in this emerging specialty. Eventually, Ganz focused on breast cancer patients.

By the mid-1980s and early 1990s, treatments for breast cancer were improving, as was the understanding of the biology of breast cancer. Women were living longer after treatment. Though they beat their cancer, they often suffered from fatigue, fertility issues, mental fogginess and cardiac problems.

“The treatment regiment choice,” Ganz realized, “made a difference.”

Knowing the late effects of cancer therapies can help doctors and patients make informed treatment decisions from the outset, especially for those with early stage cancer who will live for a long time after treatment ends.

In 1986, Ganz was among a small group of physicians and scientists who founded the National Coalition for Cancer Survivorship, the first national organization launched for survivors.

“It grew out of our interest in treating the whole person,” said Ganz, the mother of a physician and a law school student. “We shouldn’t be waiting until the end of a patient’s life to manage their pain, address their fatigue or help them with psychological distress. We need to do this while they’re still in treatment.”

Research runs in the family. Ganz’s husband, Tomas, also is a UCLA faculty member and a scientist at the cancer center. He’s been a great supporter of what was then viewed as his wife’s “unconventional” research focus.

Ganz was still working and doing research at the VA when she had what she calls a “midlife crisis.” In addition to her VA workload, she was treating patients at the county’s Olive View Medical Center, doing research and putting in a half-day at a clinic at UCLA. She felt stretched thin.

In 1992, she applied for and landed a position at UCLA that straddled health services and cancer control. She obtained grants and launched revolutionary new programs, such as the High Risk Program to help those at risk for developing breast cancer. She played an integral role in the national Breast Cancer Prevention Trial, launched in the early 1990s to determine if Tamoxifen could prevent breast cancer. She was tagged to lead the quality of life portion of the large study.

“I thought, ‘Wouldn’t it be nice not to have to tell people they had cancer,’” Ganz said.

In 1997, after the BRCA1 and BRCA21 breast cancer genes were cloned, Ganz launched the UCLA Family Cancer Registry and Genetic Evaluation Program for those with a personal or family history of cancer. Today, the registry has more than 1000 people on its rolls.

And in 2006, Ganz was selected to head up a new center for cancer survivors, funded with a grant from the poster boy for surviving cancer, seven-time Tour de France winner Lance Armstrong. Ganz serves as director of the UCLA-LIVESTRONG Survivorship Center of Excellence, which addresses the needs of the ever-increasing number of cancer survivors in the United States.

Whether it was fate or destiny, Ganz’s choice of oncology has made a difference, as she had hoped all those years ago.

“You never know when you treat a patient whether they will be a survivor or not,” Ganz said. “And when you are successful, it’s magic. I feel really lucky to have had the experience I’ve had.”