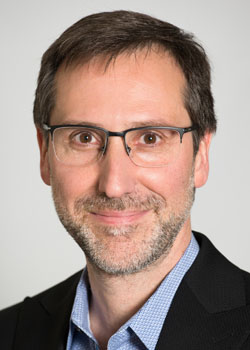 When Dr. Antoni Ribas first came to Los Angeles, he intended to stay only a short while and then return to Spain, his home country.

Ribas came to UCLA to learn about gene therapy from Dr. James Economou, a leader in the field. But it was only a temporary assignment, a brief stop over on his career path.

“When I went to Jim’s lab, I thought I’d be there one or two years and then I’d go home,” Ribas said. “I liked it so much that I stayed.”

Today, Ribas is an associate professor of hematology/oncology and a researcher at UCLA’s Jonsson Cancer Center. His research focuses on understanding how the immune system can be effectively used to treat cancer.

Ribas didn’t set out to be a doctor and cancer researcher. He wanted to be an engineer and build bridges. He started studying engineering and lasted one week.

Ribas grew up in Barcelona, one of five children, and went to medical school there. He spent every summer traveling to and working in places like Germany, Russia and the United States. One summer he came to UCLA and followed bone marrow transplant patients.

He did his residency in Spain and during that time spent three months at the University of California, San Diego cancer center. That was where he was first exposed to gene therapy.

“I thought it was much more interesting then giving chemotherapy,” Ribas said.

He also was exposed to laboratory research in San Diego, which further piqued his interest in oncology.

After completing his residency, Ribas worked for a year in Spain, treating breast cancer patients. But he wanted to learn more about gene therapy, so he wrote to places that were trying the approach in patients. Economou responded and Ribas headed to L.A.

Although gene therapy never quite met the promise it showed at the outset, the failures only served to intrigue Ribas.

“The failures told us we needed to know more about gene therapy,” he said. “That’s a good challenge to have. Every time we run into a technical or conceptual limitation, it’s interesting to work to try to overcome that.”

Currently, Ribas and his colleagues are conducting studies aimed at understanding how the immune system and targeted agents can be effectively used to fight an aggressive form of skin cancer called melanoma.

The work focuses on the use of killer immune cells called lymphocytes, which are specifically targeted to the cancer, to treat melanoma, as well as the use of specific inhibitors of cancer genes to cripple the cancer cells without affecting the normal ones.

“We are hopeful that this approach will provide more effective and less toxic therapies for these cancers,” Ribas said.

Practicing medicine and doing cancer research, it turns out, is a lot better than building bridges.

“I love what I do,” he said. “It’s not what I intended to do, but I’m glad I ended up here. I think we’re making progress, here and outside of UCLA. I think our combined efforts will make a difference.”

When he’s not in the clinic or the lab, he’s spending time with his wife and daughter. At home they speak Catalan, the language of his home country.

“Eventually we do want to go back to Spain,” Ribas said. “Maybe when we retire.”