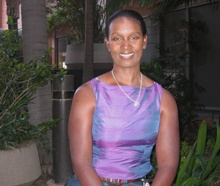 It was the worst case of breast cancer one veteran UCLA oncologist had ever seen.

The aggressive, rapidly-growing cancer engulfed Stephanie Grimes’ left breast and erupted through her skin. What started as a small, mosquito bite-like abrasion within days became an open wound.

The diagnosis: breast cancer. Grimes also tested positive for the HER-2/neu mutation, found in about 30 percent of breast cancer cases. That meant she had a sub-type of the disease that grows and spreads rapidly.

She didn’t just have breast cancer, she had one of the most deadly types.

“When I was diagnosed, it knocked me over for a brief second. My first reaction was that I didn’t want to die. Then I thought, ‘Why me? I live a good life, I exercise, I don’t drink. How could this happen to me?’ ” said Grimes, a 47-year-old fitness instructor and personal trainer and the single mother of a 16-year-old son. “But cancer doesn’t pick and choose. It can hit anyone. So I picked myself up and started in on the battle.”

She didn’t know it then, but the West Los Angeles woman would have some powerful weapons to help her with her battle against breast cancer.

Because she was HER-2 positive, the molecularly targeted therapy Herceptin could help her in her fight. Developed based on basic and clinical research done by Dr. Dennis Slamon at UCLA’s Jonsson Comprehensive Cancer Center, Herceptin targets the mutation that makes Grimes’ cancer so dangerous.

In a revolutionary new study, cancer center researchers were pairing Herceptin with another targeted therapy called Avastin, an angiogenesis inhibitor that works by cutting off the independent blood supply that tumors need to grow and spread. The two therapies were given in combination without chemotherapy, a leading-edge approach intended to directly target the cancer cells and spare patients from the debilitating side effects that accompany chemotherapy – nausea, hair loss, low blood counts, infection and fatigue.

The sole bread winner for her family, Grimes was concerned about her reaction to treatment. She needed to work, but would she feel well enough if she had to get chemotherapy? And if she couldn’t work, what would happen to her and her son?

“To say the least, things were very dire,” she said. “I had no idea what the outcome would be.”

Grimes met with Slamon, who told her that on a scale of one to 10, her cancer was an 11. Typically, someone with that aggressive a cancer has just months to live. Grimes was not a candidate for surgery. As far as conventional therapies went, that left chemotherapy.

But Slamon told Grimes about the Herceptin/Avastin clinical trial and suggested she enroll. She agreed without hesitation.

“This was one battle that I was not going to lose,” Grimes said. “I knew I had to fight.”

That was less than 15 months ago. Today, tests indicate that Grimes’ cancer is gone. Scans that previously showed a lumpy mound of tissue that didn’t even resemble a breast now show what appears to be normal tissue without a hint of cancer.

And because she didn’t have to get chemotherapy, Grimes was back in the gym right away, teaching 15 to 16 aerobics classes a week. In fact, the day after her first infusion of Herceptin, she was back at work at 6 a.m. the next morning and worked a full day.

“This treatment gives me quality of life,” Grimes said. “I continue to teach my classes and I can keep up with my son’s heavy schedule. I don’t know that I’d be able to do that if I was on chemotherapy.”

The Avastin/Herceptin study represents the next generation of studies researchers are working on at UCLA, clinical trails that take chemotherapy out of the mix but have the same or an even better result, Slamon said.

“This is the first study that takes us in that direction and the results are promising,” he said. “The responses we’ve seen are as good as anything we’ve seen in this group of patients, even with our best chemotherapies.”

“When I was first diagnosed, things looked bleak. But from my first treatment I saw changes and improvements,” she said. “It was amazing. I had advanced breast cancer that had spread from my left breast to my right breast and to my lungs. Now I look at myself and I think, this is the definition of the word miracle. I have been given the gift of life and that’s priceless. I’m here today because of this treatment. Saying thank you is not nearly enough.”

UPDATE 12/06/11: Stephanie Grimes is still doing well and now is taking Herceptin only.