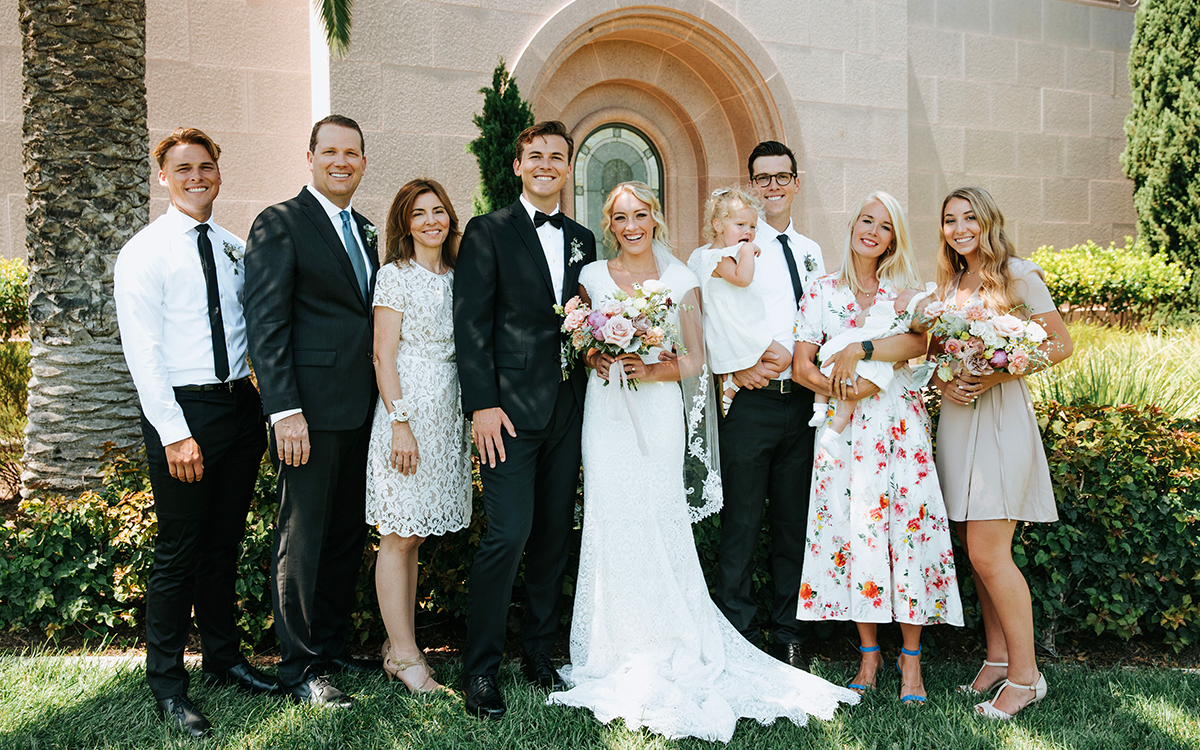 Leukemia survivor Richard Hart and his wife Jennifer at their wedding.

Throughout his life, Richard Hart has had what he calls dumb luck: Everything turns out well, whatever it is.

Some might say his luck ran out when he was diagnosed with acute T-cell lymphoblastic leukemia in 2019. But Hart sees things differently.

Hart’s cancer journey began on Father’s Day of that year when his wife, Jennifer, noticed he couldn’t catch his breath after climbing the stairs in the family’s Agoura Hills home. Hart shrugged it off as a summer cold, but his wife insisted they go to urgent care.

There, a chest X-ray revealed a mass on the back side of his chest bone and the urgent care physician had Hart admitted to Los Robles Regional Medical Center. “She said, ‘Go directly there, don’t even go home, don’t pack anything, just go there.’ That got my attention,” says Hart, 54.

After a week at Los Robles, where he underwent a mediastinal biopsy, Hart’s records were sent to UCLA’s Jonsson Comprehensive Cancer Center where the Harts met with Gary Schiller, MD, professor of hematology/oncology at the David Geffen School of Medicine at UCLA and director of the hematological malignancies/stem cell transplantation unit.

“It was like a gut punch,” Jennifer Hart says about the diagnosis. “It just knocks the wind out of everything. It tempers everything you see; you can’t see the world the same after you hear it.”

ALL affects about 6,000 people per year in the U.S.; about half are adults, says Dr. Schiller, who is also a member of the UCLA Jonsson Comprehensive Cancer Center. Of those adults, only about 800 have T-cell lymphoblastic leukemia, as Hart did, and most are young men between ages 18 and 30.

Hart’s treatment began with induction therapy – a month of chemotherapy infusions to clear the blood and bone marrow of immature white blood cells and to induce remission.

Hart says he stayed positive throughout his treatment. He preferred to focus on the procedure at hand and not look ahead. Meanwhile, his wife read everything she could find about her husband’s cancer.

“I felt like my job was to protect him from the details and, since I could deal with it, I would take care of it,” Jennifer Hart said. “His job was just to get better and sleep and eat and enjoy as much as possible.”

Eliza Hart, 19, the youngest of the couple’s four children, says it was difficult seeing her strong, athletic father in pain.

“At the beginning it was very scary because we didn’t know exactly what was going to happen. But my parents were very optimistic, and they tried to shield us from any excess pain or fear. They were both very positive,” she says.

Soon, there were encouraging signs. Tests performed after induction revealed no cancer in Hart’s blood or bone marrow.

“For them it was a great medical success,” Hart says. “For me, it was a miracle.”

But even after remission, there were certain features of his disease that were worrisome for a higher risk of recurrence. To prevent this, he would need a bone marrow transplant. Surprisingly, five out of six of his siblings were matches to donate.

“I was told the odds of having that many matches among siblings is less than winning the mega million lottery,” Hart says. “It just never happens.”

In the days that followed, each of Hart’s siblings would independently text him offering to donate. Ultimately, Hart’s younger brother, Stewart, was chosen as the best match.

“I was more than happy and willing. Whatever I could do to help,” says Stewart Hart, 42, of Salt Lake City, Utah.

After a two-week break to attend his son Keaton’s wedding, Richard Hart resumed treatment, culminating with six weeks in the hospital for high-dose chemotherapy and radiation to kill his existing bone marrow before the transplant. He endured repeated bone marrow biopsies in which a metal rod was inserted into his back and the bone was chipped away to remove the diseased marrow.

Hart fought back tears when describing how his unwavering optimism, faith in God and trust in the treatment process got him through the tough times.

“Throughout the process what really stood out to me is the nurses, the doctors, the technicians that I would deal with. I don’t remember all their names, but I can see every one of their faces,” he says.

They are people such as Dr. Schiller, Hart says, whose expertise and kindness are astounding; Samara Lucas, BSN, RN, who after working a 12-hour shift brought him a “chemo kit” she had filled with supplies to make Hart’s treatments tolerable; and Eri Hirofuji, NP, whose calm reassurance remains a lifeline for the family.

Jennifer Hart agrees. “I felt like I could contact them at any moment with any concerns, and I was responded to as quickly as they could get back to me.”

The transplant took place at Ronald Reagan UCLA Medical Center in late September 2019 and, by all measures, it was a success.

“There’s been no evidence of recurring disease, but we will follow him probably for the rest of his life,” Dr. Schiller says.

About a month after the transplant, Hart was released to UCLA’s Tiverton House where he and his wife stayed four weeks before returning home. He now has biweekly blood tests to check for recurrence of the cancer and screenings for graft-versus-host disease, a condition in which the donor marrow attacks the body.

At about the one-year anniversary of the transplant, Hart says he considers his cancer a blessing.

“Instead of feeling like I had it bad, I realized that I actually had it very good,” he says. “There has never been a cause for complaint because it’s all swallowed up in gratitude. To complain would be an offense to mankind because I was treated so well.”