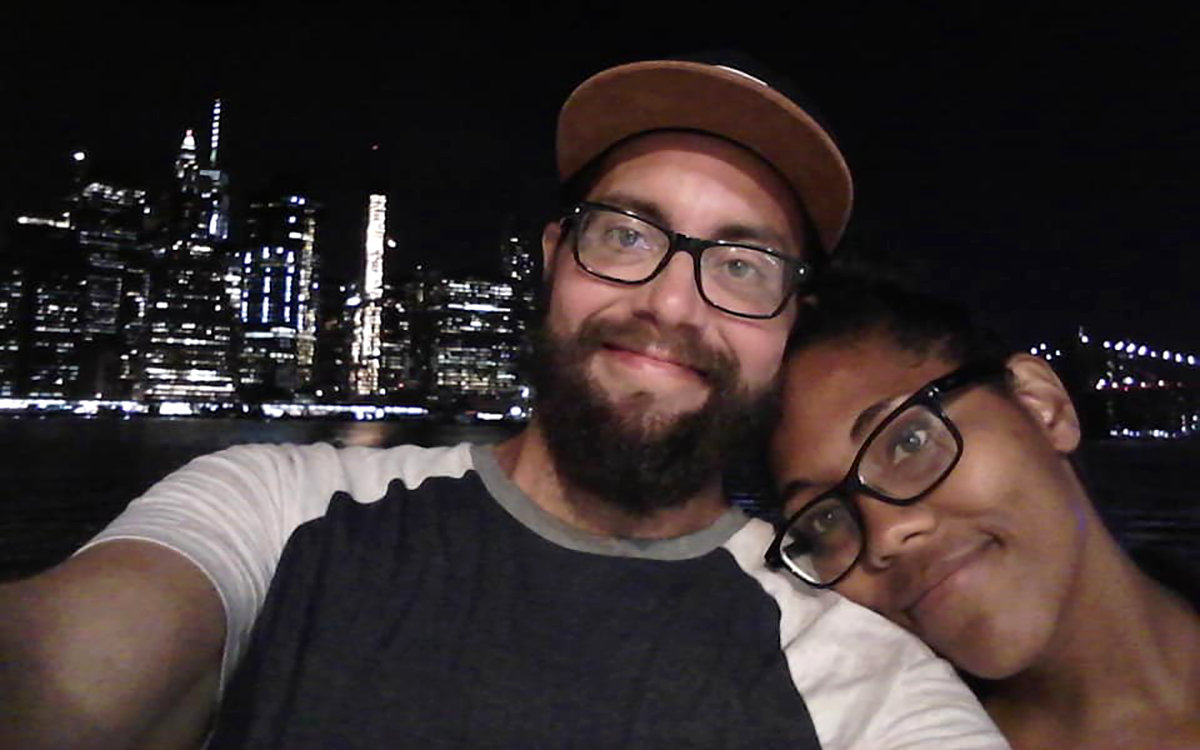 Leukemia survivor Matthew Getic and Kendra Beltran, on the night he proposed to his future wife.

Matthew Getic, 32, started 2017 in great shape. Right before he turned 30, he dropped nearly 200 pounds and working out became part of his daily routine. So when he began to have back pain that year he attributed it to his new fitness regimen.

“I thought maybe I pulled a muscle,” said Getic. “But I was in pain for about a month and it just kept getting worse and worse.”

He finally went to urgent care for his pain — twice — but doctors couldn’t find anything wrong with his back. One even said it could be linked to an intestinal issue.

Getic and Beltran were heartbroken.

“I kind of just felt like the world was about to end because all they told me was that I had leukemia,” said Getic. “I didn’t really even understand what leukemia was, I just immediately started thinking that the doctor was going to tell me I was going to die soon.”

Luckily that wasn’t the case.

Being treated by the best

After his diagnosis, Getic was told he needed to be treated at UCLA since his local hospital was not equipped to deal with a case like his. The treatment for a majority of blood cancers is very complex and requires a multidisciplinary approach that is better served at an academic institution such as UCLA.

UCLA has one of the oldest ongoing Blood and Bone Marrow Transplant Programs in the country and one of the world’s first bone marrow transplants was performed at UCLA.

“The best place I could be at is UCLA,” said Getic. “It was a blessing that I was in Los Angeles when I got diagnosed and was able to be treated at one of the best hospitals in the country.”

As soon as he got to UCLA, Getic’s team of doctors started him on chemotherapy, and not long after they planned for him to receive a stem cell transplant. This would give him the best chance at being cured.

Getic would be receiving an allogeneic stem cell transplant, a procedure that transfuses healthy blood stem cells from a donor into a patient to replace his or her damaged bone marrow.

“You can basically view allogeneic stem cell transplants as the first immunotherapy,” said Getic’s oncologist, Monica Mead, MD, clinical instructor of hematology and oncology at UCLA Health and the UCLA Jonsson Comprehensive Cancer Center. “This procedure harnesses the immune system to find leukemia cells to help prevent a relapse. This type of transplant includes the infusion of a donor’s bone marrow stem cells as well as a donor’s immune system cells. The donor’s immune system cells recognize any remaining leukemia cells as foreign and will mount an attack against any remaining leukemia cells.”

Getic knew he needed a stem cell transplant to help rid his body of the disease, but first he needed a donor.

To be a full match, a patient and donor need to share multiple immune system genes. Siblings are often good candidates for a donor, but if a sibling is not a match, then patients will go on the donor registry.

Getic’s sister tested to see if she was a donor, but unfortunately was only a half-match, so the search continued. Getic’s family and friends did what they could to help.

“Everyone I knew wanted to sign up on the registry to see if they were a match, not knowing that there's probably a million-in-one shot that that would happen,” said Getic. “But it was cool to see that everyone really wanted to help. My old friends, people I lived near, people I went to church with, just everyone really. I was very lucky. It was definitely one of the reasons why I think I got through everything.”

Getic was on the registry, called Be the Match, for four months when he got the call that a matching donor had been found. At the time, he wasn’t given any information about the donor. He just knew whomever this person was, it was his new hero.

“I remember being in the Ronald Reagan UCLA Medical Center on 6 East, surrounded by doctors, watching that bag of magic, full of stem cells, give me a second chance at life,” said Getic.

About four weeks later, Getic and Beltran were back at home to finish his recovery. But Getic couldn’t get his donor off his mind.

Do to privacy policies, there is a required waiting period of one to two years for any contact between patient and donor.

Getic would often look at a photo of the bag of stem cells whenever he thought of his donor.

“I used to look at the photo a lot,” said Getic. “I was just so curious. I wondered if my donor was a guy or a girl, what they looked like, if they were happy, just who they were.”

In 2020, Getic finally got the chance to find out who exactly who his donor was: Gayleen Rogers, who lived a little over 8,000 miles away in Australia. They haven’t been able to meet in person, but have connected online and are friends on Facebook.

“It’s just so cool to connect with her,” said Getic. “She’s also emailed with everyone — my mom, my dad, sister and my wife. She's definitely been inundated with love from the United States. But it's definitely been great to connect with her. It’s one of the coolest parts of everything because that was definitely a huge question I always had and it was only recently I found out really who she was. So that was kind of like a huge milestone for me.”

Another huge milestone was marrying Beltran, who was by his side every step of the way during his diagnosis and transplant.

“I was just very lucky to have my wife and her family support me right when it all happened,” said Getic. “There were so many people helping me – family, friends, social workers, nurses, doctors, just everyone. I went through such a whirlwind of emotions, but ultimately, because I had so much support, I felt like it wasn’t such a scary thing.”