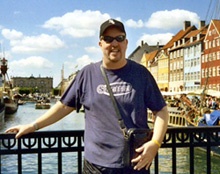 The melanoma had spread throughout his body. It was everywhere, and none of the surgeries or chemotherapies or radiation seemed to work.

So Joseph Rick planned a trip to Illinois and bought a grave plot next to his father. Once a big guy, he’d lost 165 pounds. He could barely walk.

“I put my affairs in order,” he said. “There was nothing more to do.”

Today, Rick is busy planning a summer trip overseas. The experimental drug he receives through a clinical trial at UCLA’s Jonsson Comprehensive Cancer Center wiped the advanced melanoma from his body. The bag of fluid he now gets intravenously every three months has given him his life back.

“I’d started to lose faith in the medical profession. It was UCLA and my doctors there who gave that faith back to me,” said Rick, who teaches at a Los Angeles area high school. “They’ve given me a new life, a second chance. I’m humbled by what has been given to me. It’s amazing.”

It was a torturous journey for Rick, a 46-year-old Los Angeles resident who was diagnosed with melanoma on Feb. 15, 2002.

He’d gone to his doctor because he noticed some blood in his stool. The doctor found a growth near his rectum and diagnosed it as an external hemorrhoid. A proctologist to whom he was referred concurred and scheduled outpatient surgery to remove it. He returned a week later for routine follow-up and got news that was anything but routine. He had melanoma.

“I said, ‘What are you trying to tell me?’ and the doctor told me I had cancer,” said Rick.

Rick was referred to a Santa Monica oncologist and he didn’t know it then, but more than a year of surgeries, poisonous chemotherapy and fatigue-inducing radiation lay ahead of him. And none of it would work.

He underwent eight major surgeries to remove more skin from around the site of the growth and to take out lymph nodes in his leg and parts of his colon, liver and right lung.

He was hospitalized so he could receive biochemotherapy, a harsh course of chemotherapy combined with interferon and interleukin. It almost killed him, but not the cancer.

At the urging of his home health nurse, Rick sought a second opinion from USC and was advised that further chemotherapy and radiation were pointless. An experimental therapy was his best option. Unfortunately, he didn’t qualify for a USC vaccine study. So the oncologist sent him to see Dr. John Glaspy and Dr. Antoni Ribas, top melanoma specialists at the Jonsson Comprehensive Cancer Center.

Ribas put Rick on a clinical trial testing the drug tremelimumab, an anti-CTLA4 antibody being tested in melanoma patients. CTLA4 acts as a brake on the immune system, keeping it in check so it doesn’t randomly attack the body. The antibody releases that brake so the immune system can better fight the cancer.

The drug works well in some patients, but not in others and doctors don’t know why. They could only wait and see.

When Rick went to see Ribas, he had blotches on his legs and groin. That, Ribas explained, was the melanoma spreading. Rick received his first dose of tremelimumab in March of 2003. Within a month, the blotches had disappeared.

“I called Dr. Ribas to tell him and he told me to come in immediately because he couldn’t believe it,” Rick said. “The blotches were completely gone.”

After two months, the cancerous growths inside his body had shrunk by 25 percent. After a year, the cancer was undetectable.

For two years, Rick received the drug every 30 days. Now he gets the infusion every three months. He gets a CT and MRI scan every three months and a PET scan once a year to monitor for cancer. Although there are potential side effects from the drug, Rick doesn’t experience any of them.

Healthy again, he’s been able to indulge in his love of travel. Since his diagnosis, he’s traveled to Germany, Austria, Sweden, Norway, Finland and Denmark. He’s been on a southern Caribbean cruise and a cruise to Bermuda. He’s visited Paris, Amsterdam, Brussels and Singapore.

“I’m loving life,” Rick said. “I have a whole different outlook now, a different perspective. When people in the airport have a fit because the plane is late, I think about how lucky I am to be waiting for that plane. When people complain about having to go to work, I think about how blessed I am to be teaching these children. I’ve changed the way I look at what’s possible.”