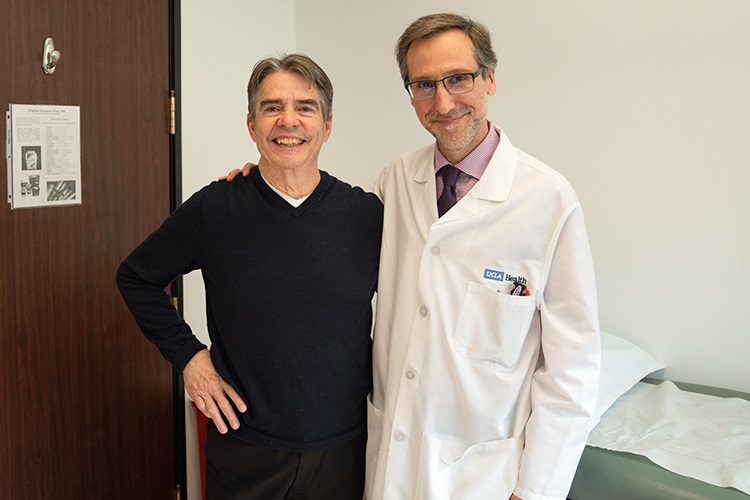 Jim James, left, underwent surgery to remove a brain tumor and then enrolled in a clinical trial led by Dr. Antoni Ribas (right) that included PD-1 blockade therapy to treat tumors in his lungs and liver.

Jim James, an engineer, husband, and father of two teenagers, has always been a “look on the brightside” kind of guy.

So it was no surprise when he was diagnosed with advanced melanoma in 2018 that he remained positive and grateful to everyone who crossed his path.

“There really wasn’t ever a moment that I wasn’t staying positive or overly troubled by what happened,” James said. “Rather, I was grateful for the early successes and very hopeful for continued treatment at UCLA.”

It all started when James started having severe headaches and nausea in late February of 2018.  When he went to his primary-care doctor for a checkup, the last thing he expected to hear was that he had cancer, let alone metastatic melanoma, and that it had already spread to his brain and other organs.

“Everything just started happening at lightning speed once they saw the tumor in my brain,” recalls James. “My appointment with my primary-care physician was at 9 a.m., and by 11 a.m., I was in an ambulance being transferred to another hospital to have brain surgery.  It was so fast I could hardly catch my breath.”

Within a day of being diagnosed, James, then 70, underwent brain surgery to remove a tumor about the size of a 50-cent piece from the back of his skull.  He was discharged two days later; and the next morning he went back to the office ready to work, determined to keep his life as normal as possible.

He knew brain surgery was just the beginning of his treatment. While the tumor from his brain was successfully removed, he still had tumors in his liver and lungs. His doctors encouraged him, early on, to start looking for a clinical trial that would hopefully provide the most advanced therapy available.

That search led him to Antoni Ribas, MD, PhD, professor of medicine at the David Geffen School of Medicine, and director of the UCLA Jonsson Comprehensive Cancer Center’s Tumor Immunology Program.

Dr. Ribas, a pioneer in cancer immunology, studies how the immune system can be effectively used to fight cancer in order to develop more effective and less toxic therapies for people with melanoma.

He helped develop and demonstrate the effectiveness of the drug pembrolizumab (Keytruda), the first-of-its-kind immunotherapy, to treat advanced melanoma, which has been a significant advancement in the treatment of the disease. The drug became a game-changer for people who were diagnosed with melanoma, which was once thought as untreatable.

“Within a few seconds of sitting down with Dr. Ribas, we felt like we were in very good hands,” James and his wife said. “He radiates confidence, and he instills in us that same level of confidence.  Every day I continue to count my blessings and feel extremely grateful to have found Dr. Ribas.”

James knows just how many blessings have come his way. It wasn’t long ago that people who were diagnosed with advanced melanoma were told they only had months to live. 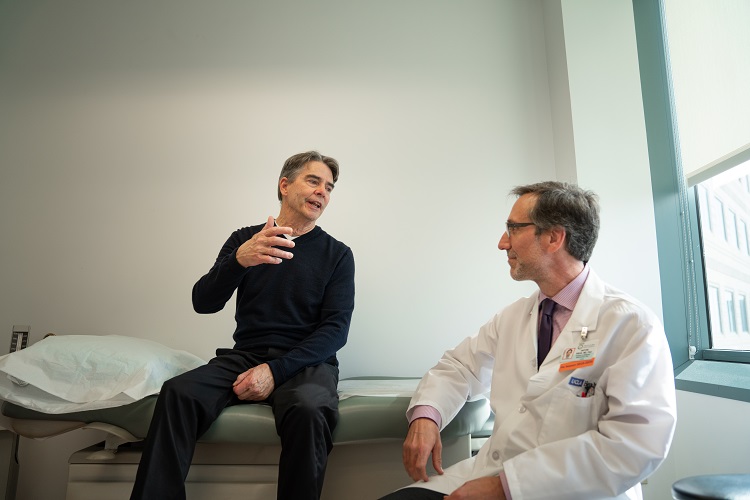 “When I started treating cases of melanoma that have spread through the body and have metastasized to other organs, maybe 1 in 20 responded to treatment,” said Dr. Ribas, who also serves as the director of the UCLA Parker Institute for Cancer Immunotherapy Center. “Nobody in their right mind wanted to be a specialist in this field. It was the worst-of-the-worst cancers. There was really nothing we could do.”

But all that has changed in the past decade. Newly developed targeted therapies and immunotherapies, like PD-1 blockade therapy, are now changing the course of the disease.

The drug is an antibody that blocks a protein called PD-1 that is expressed by immune cells. PD-1 puts the immune system’s brakes on, keeping T cells from recognizing and attacking cancer cells. Anti-PD-1 antibodies release the brakes from the body’s immune system, which allows it to attack the cancer cells.

Most of the tumors throughout James’ body have diminished in size by at least 50% and there’s no trace of any new tumors.

“We put all our faith in his (Dr. Ribas) hands, and certainly we have not been disappointed,” James said.

This past November, James and his family joined Dr. Ribas and his team at the Melanoma Research Foundation’s annual 5k run/walk – Miles for Melanoma – at Griffith Park to help raise awareness and support the fight against melanoma. 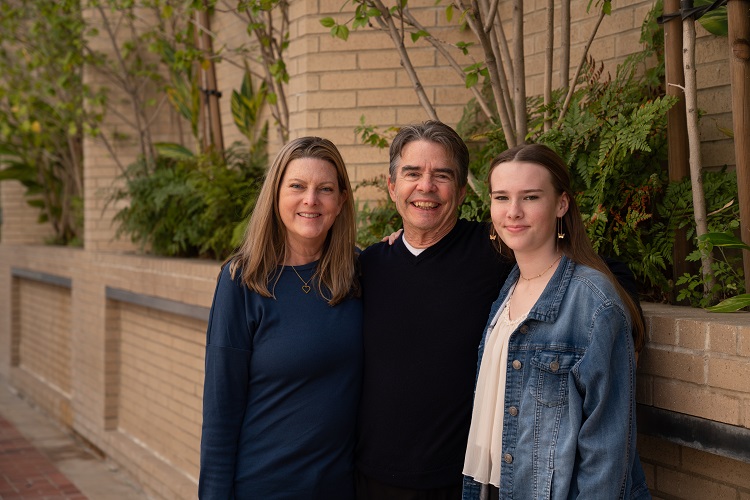 James, his wife and two kids were easy to spot – they were wearing custom-made Bruin baby blue shirts with the number 563 printed on the front.  James chose the number 563 because at the time is was 563 days since he had his first treatment at UCLA.

At the walk he met other patients of Dr. Ribas and realized he was now in a special club. “Being there with other people in similar situations was inspiring,” James said. “I was especially inspired to be representing UCLA having completed undergraduate and graduate school from UCLA nearly 50 years earlier."

The past two years have definitely not been easy for James. Along with his immunotherapy treatment he underwent a major brain surgery, has had 19 CAT scans, 10 MRIs, and four PET scans; and still counting.  Through it all, he continues to make it to work every day, and, along with his wonderful wife, enjoys and attends all his kids’ basketball games and drama productions.

"I am very appreciative to share this story, and for all the support from my family, friends, RBC Lubron co-workers, and most of all, Dr. Ribas and his staff.”