Cindy Robinson knows too well just how short life can be. When she was just 22 years old, she watched her mother succumb to a 12-year battle with breast cancer.

“Obviously, women’s health initiatives go straight to my heart,” Robinson said. “It breaks my heart when anyone I love goes through anything like this and I want to help in any way I can. Family means the absolute world to me.”

For her mom, Robinson became her main caretaker during her final months and was there with her until the end.

For Fournier, who is now like a mother figure to Robinson, she decided to generously contribute to the Debi & Gary Fournier Cervical Cancer Research Fund at the UCLA Jonsson Comprehensive Cancer Center. The fund is aimed at developing innovative, new and novel treatments for women diagnosed with cervical cancer.

Philanthropy, and making a difference, is a priority Robinson learned from her mom who created the Barbara K. Robinson Breast Cancer Research Foundation as well as a women’s boutique and clothing store in Hermosa Beach called PINK – People Inspiring New Knowledge – with 100 percent of the profits directed to cancer research.

“I just know Barbara, Cindy’s mom, is smiling down from heaven,” Fournier said. “Cindy has such a big heart and her goodness comes through in so many ways. She is committed to making a difference in her community and beyond, continuing her mother’s legacy in her own unique way.”

Each year, more than 500,000 women are diagnosed with cervical cancer worldwide and more than 250,000 women die from the disease. While these numbers are decreasing thanks to the use of the Pap and human papillomavirus (HPV) tests, which find changes in the cervix before cancer develops or find cancer earlier enough to treat, if not caught early, cervical cancer can become extremely difficult to treat.

In Debi’s case, she was diagnosed with a high-risk form of HPV more than two decades ago. Since her diagnosis, she was diligent about getting a HPV test every six months. She even had several precancerous tissues removed over the years. Yet, the cervical cancer somehow grew undetected, even with rigorous follow-ups.

“I was seeing my gynecologist for regular checkups every 6 months. I knew I was HPV positive,” said Fournier. “I was really on top of it... well, I thought I was on top of it, but the cancer was still missed.”

At first, she was told she was lucky since the cancer was caught at an early stage (stage 1B2, with clear margins) and no lymph node involvement, meaning the chance of the cancer spreading to other parts of her body was very unlikely. But, two years later, the cancer managed to metastasize to her lungs. 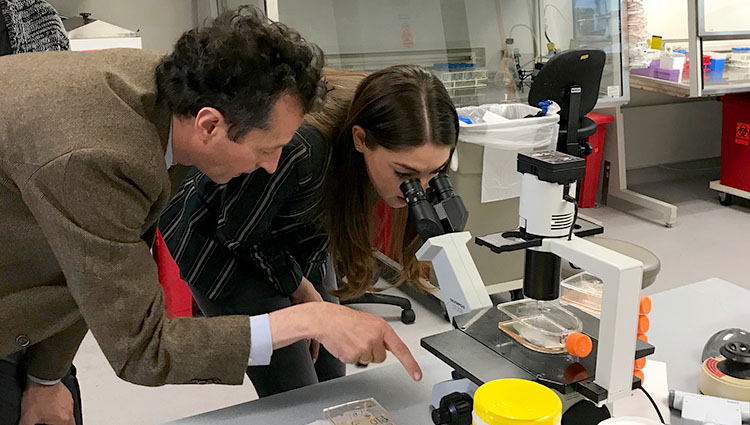 Cindy with Dr. Gottfried Konechny, who is leading the research at the UCLA Translational Oncology Research Lab.

Due to the cancer spreading, treatment options are dwindling for Fournier. Even after surgery, radiation and chemotherapy, there still was no cure for her disease.

That’s when she came to the UCLA Jonsson Comprehensive Cancer Center and met her current oncologist Dr. Gottfried Konecny, professor in the department of medicine and hematology/oncology.

Since standard treatment wasn’t working, Konecny put Fournier on immune therapy. But, the ever-resistant cancer remained in her lungs even after participating in two separate clinical trials.

After battling the disease for 7.5 years, Fournier has yet to be in remission. She’s presently undergoing chemotherapy once again as she waits for a better treatment option to come along.

That’s one of the reason’s Fournier and her husband created the Debi & Gary Fournier Cervical Cancer Research Fund: to help develop new therapies to treat and ultimately, cure cervical cancer.

Under the direction of Dr. Konecny, the fund supports the start-up of cervical cancer research at the UCLA Translational Oncology Research Lab through the Jonsson Cancer Center Foundation, where over 90 percent of the money donated goes directly to research.

“Cervical cancer is the second most common female cancer in the world and is still a disease in need of effective therapies,” said Konecny. “Yet, cervical cancer research receives very little public funding relative to its global burden when compared to other cancers such as breast, prostate or lung cancer. There is an urgent need for sustainable investments in the entire continuum of cervical cancer research to help develop better prevention and treatment strategies.”

“Until recently, cervical cancer has always been treated with the same drugs as if every case is the same,” said Fournier. “Very little has changed over the past 45 years regarding its treatment protocol. But what we're finding is there are sub-classes of cervical cancer just like breast cancer and other cancers. Each person’s cancer is unique.”

The UCLA Translational Oncology Research Lab is analyzing these various cell line panels to create distinct molecular subtypes, which can allow researchers to develop targeted therapies for the individual subtype.

For example, recent studies identified three general clusters of cervical cancer based on the presence of different HPV and other genomic features. More than 70 percent of the tumors have genomic alterations in either one or both of the PI3K/MAPK and TGF-beta signaling pathways. These might serve as future targets for potential therapies. Additionally, two genes that code for known immunotherapy targets were also amplified within many tumors. This insight may lead to ways to predict whether a tumor will respond to immunotherapy.

“You have to think a little bit outside of the box,” said Fournier. “I kind of look at myself as a little bit of a teaching body at this stage because I'm doing things and willing to do things that are not the norm. I'm hoping that my efforts will be helpful to others by eventually improving outcomes for women with cervical cancer.”

Along with philanthropic efforts, Fournier and Robinson are committed to educating more people about cervical cancer prevention – especially in regards to the HPV vaccination.

“There’s a lot of misinformation about the HPV vaccination that needs clarification,” said Fournier. “Many parents are afraid to vaccinate their children. In fact, only 60% of kids in the U.S. are receiving the HPV vaccine even though it has been statistically proven to significantly reduce the incidence of cervical cancer and other HPV-related cancers in boys and girls”.

“It has sort of been shoved under the rug because HPV is a sexually transmitted infection,” added Robinson. “There’s a negative connotation around it and people are embarrassed to admit they have it. I would love for us as a country to release the social stigma of getting tested for things like HPV.”

While the ultimate goal is to help find a cure for cervical cancer, Fournier and Robinson want more than anything to just be able to help – in any way they can. And that includes working with other organizations, and even just talking and educating family and friends. They believe there’s always something you can do.

“You don't necessarily need to have gone through something personally to help raise awareness,” said Robinson. “You can be a support in special ways. You just need to find what your passion is about and use that to contribute to the cause.”

“I have been amazed at the financial and administrative support provided by the Jonsson Cancer Center Foundation,” said Fournier. “I think most people assume one needs to be famous or exceedingly wealthy in order to initiate this caliber of cancer research. I’m neither one of these things. Through a grassroots effort aimed at family and friends, I’ve been able to provide seed money to get the ball rolling with respect to cervical cancer research. I’m eternally grateful to all who have supported me in my efforts.”

And it is clear that Fournier and Robinson’s passion is to help others, especially those dealing with women’s cancers.

“I want to make things easier for people in the future — for others who might have to deal with HPV or cervical cancer,” said Fournier. “I remain optimistic that cervical cancer might someday be eradicated in the United States and beyond. Until then, we need to continue working towards finding a cure for those who are suffering from this disease today.

“I am honored to be able to support such an amazing team of medical scientists and physicians through the UCLA Jonsson Cancer Center’s Translational Oncology Research Lab. I consider it a true blessing that in my own small way I'm able to contribute toward their worthy goals."