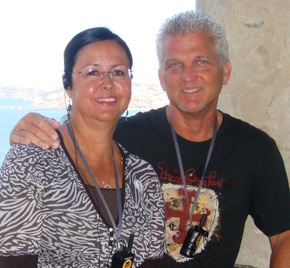 Carson Lev is the poster boy for early detection of prostate cancer.

Although he was a regular at the annual Cruisin’ For A Cure car show, which raises money for research at UCLA’s Jonsson Comprehensive Cancer Center, he avoided the free, on-site prostate cancer screening tests offered to men over 40. Although hounded by friend Debbie Baker, the event organizer, Lev just didn’t want to be tested.

But at the event in 2002, Baker finally prevailed, dragging Lev to the testing van where the blood tests were being administered.

“I didn’t think about the test for more than two seconds,” Lev said, adding that he wasn’t worried about having cancer.

“I remember getting the envelope in the mail and I didn’t know what it was,” Lev said. “I opened it up and I was like, oh my gosh. I saw the numbers and I knew what they meant. It was like a cold shower.”

His prostate specific antigen, or PSA level, was 5.6. Anything over 4.0 is a red flag. At the bottom of the note was this message, in bold face type: See Your Doctor.

“I was home alone and I remember standing there and thinking, OK, let’s play this out in your mind,” Lev recalls. “Best case, it’s an infection or inflammation of some kind. Worst case, I have prostate cancer. Then I decided it was nonsense, a bad test result.”

He saw his doctor, who agreed that it was unlikely Lev had prostate cancer. He was too young, his prostate was only slightly enlarged. It had to be something else.

The doctor put Lev on antibiotics and other treatments for about eight months, but his PSA was slowly creeping up. Finally, he asked for a biopsy.

“The phone rang and it was the urologist calling,” Lev said. “I knew then I had cancer. The nurse calls you when it’s good news.”

He did indeed have prostate cancer, an aggressive form that was capable of growing rapidly and spreading throughout his body. With the help of Baker and his personal physician, Dr. Scott Shiffman, Lev was referred to UCLA, where he saw Dr. Jean deKernion, chairman of the urology department and a Jonsson Cancer Center researcher.

After consulting with deKernion, Lev decided to remove his prostate using a nerve sparing technique designed to help men retain sexual function. deKernion told him he was lucky he had the PSA test when he did or he might also be facing radiation or hormone therapy, which acts as a sort of chemical castration.

Before surgery, Lev sat down with his wife Nancy and his three grown children, Aaron, Nicole and Cristina, to talk about his treatment strategy, discuss the potential side effects and warn them that it wasn’t clear yet whether the cancer had spread or not. If it had spread, the situation would be much more serious.

Lev underwent surgery and was hospitalized for two days, then went home. A few days later, he got the phone call that he said changed his life. The biopsy of his prostate gland revealed only one small cluster of cancer cells in a localized area. The cancer was not widespread throughout the prostate gland and hadn’t spread anywhere else. As a result, he did not need further treatment. deKernion told him to “go and live his life.”

That PSA test - and Baker - saved his life, Lev said. Although his cancer was aggressive, he probably would not have exhibited any symptoms for about 10 years. By then, the cancer mostly likely would have spread outside the prostate and would have been much more difficult to treat, maybe impossible.

Lev calls Baker his guardian angel. It was she who dragged him to that van and made him get the test. Now Lev serves as an advocate for other men, talking to them at the car shows he frequents about the importance of getting their PSA tested.

Lev has now been cancer-free for five years. For the first year out, he had a PSA test every three months, then every six months for the next three years. Now, he’s tested annually, just like men who have not had prostate cancer.

“I’ve had an amazing recovery,” Lev said. “I’m the poster boy for early detection. Because I caught my cancer early, I had a very positive outcome. Sometimes I have to remind myself that I had cancer.”

Lev suffers from no side effects from his surgery and his active lifestyle – he’s an avid water skier and mountain biker – is the same as it was before he was diagnosed with cancer.