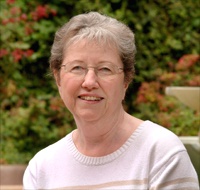 Three shots did for Carol McSeveney what six surgeries, 32 doses of radiation and six infusions of interferon could not – beat back the stage IV melanoma that threatened to take her life.

Today, eight years after her diagnosis with an aggressive form of melanoma, McSeveney is cancer free. And she says her participation on an experimental vaccine study at UCLA’s Jonsson Comprehensive Cancer Center saved her life.

“I absolutely don’t think I would be living today without the vaccine,” said McSeveney, 72, who lives with her husband, Don, in the San Gabriel Valley. “I feel that I’ve been given the greatest gift, the gift of life, through this clinical trial. I’m incredibly grateful.”

McSeveney, who had a melanoma removed from her leg 32 years ago, noticed an unusual growth on her right arm in March of 1999. It looked a little like a red jelly bean and she’d never seen anything like it, she said.

Her doctor removed the growth and ordered a biopsy. A week later McSeveney received a call with her diagnosis. She, again, had melanoma, a form of skin cancer that begins in the melanocytes, an epidermal cell. Her physician referred her to Dr. James Economou, professor and chief of surgical oncology at UCLA, deputy director of the Jonsson Cancer Center and a melanoma specialist.

McSeveney saw Economou in April of 1999 and underwent surgery to remove a wider section of skin around the lesion site and the lymph node closest to the lesion. A week later she received the results. The news was positive. A biopsy had found no cancer in the lymph node. McSeveney’s prognosis looked good.

But six months later, McSeveney noticed a pea-sized nodule growing in her underarm, near where her lymph node had been removed. She returned in October 1999 to see Economou, who removed the nodule, biopsied it and confirmed that her cancer had recurred. Soon afterward, another nodule appeared nearby and that one was removed as well.

In January of 2000, McSeveney was given interferon, an immunotherapy that is often used to treat melanoma. The treatment, which can sometimes have harsh side effects, played havoc with McSeveney’s emotional state. She felt her usually optimistic personality changing drastically.

“I felt I was going downhill,” said McSeveney, the mother of two grown daughters. “I was very depressed and emotional. I felt I was getting sicker and sicker.”

Soon, more nodules appeared. In all, McSeveney underwent six surgeries to remove melanomas, but new cancers kept growing. Next on the treatment menu was radiation to her upper and lower arm, where the nodules kept appearing. She underwent two regimens of radiation, with 16 sessions each for a total of 32 treatments. She had taken advantage of the best weapons in the cancer arsenal - surgery, radiation and immunotherapy - and still the melanoma kept growing.

In the spring of 2000, McSeveney’s cancer came roaring back with a vengeance, this time resembling chicken pox lesions. At one point, she counted nearly 90 lesions on her body.

Meanwhile, at UCLA, Economou and Drs. Antoni Ribas and John Glaspy were conducting a clinical trial of an experimental vaccine for melanoma. McSeveney was tested to see if she qualified for the study. Thankfully, she did.

The experimental therapy involved a vaccine using dendritic cells, specialized blood cells that recognize foreign substances and stimulate an immune response to fight invaders. Blood was taken from McSeveney in a process that collected just her white blood cells. Those cells were then grown for a week in a lab and transformed into dendritic cells, which were then loaded with a protein called MART 1. The protein, specific to melanoma, would, in theory, prompt her immune system to recognize the cancer and attack it.

McSeveney received the personalized vaccine in the summer of 2000. She was given three shots over a six-week period. She responded to the treatment almost immediately.

“Without an effective treatment, and there’s not many for melanoma, her life expectancy would have been two years,” Ribas added. “So we were very excited to see what we had thought would happen with the vaccine did happen.”

By the summer of 2001, all McSeveney’s lesions had completely disappeared, leaving behind only small scars. Just to be safe, she underwent a second round of three vaccine injections that summer as a booster. Her cancer has not returned. At her regularly scheduled six-month checkup at UCLA in June of this year, Ribas gave McSeveney a clean bill of health. Her CT scans were clear. There was no sign of melanoma anywhere.

Economou and Ribas like to call McSeveney the poster child for the melanoma vaccine. She likes to characterize it another way, one that demonstrates that her former good humor has been fully restored along with her health.

“I feel that I’m on the cutting edge of medicine, one step up from a lab rat,” she says today with a laugh. “Before me, they’d only seen results like mine in mice. They tell me the vaccine has killed at least 100 million cancer cells. Isn’t that amazing?”

The vaccine also provided other gifts.

It has allowed McSeveney to watch her only grandson, John David, 7, learn to walk and talk. She got more time with her daughters, Nancy and Linda, who provided her with an incredible support system when she was ill. She was able to celebrate seven more wedding anniversaries with her beloved husband.

“He was my greatest support,” McSeveney said. “He was wonderful.”

These days, McSeveney concentrates on enjoying life. She spends a lot of time with her family and loves working on her computer, keeping in close touch with friends all over the country. Cancer, she says, has taught her a lot about how to live.

“I go from day to day now, thanking God for this gift,” she said. “I’m thankful and grateful to be able to live daily. I’m also so grateful for my UCLA physicians, Drs. Economou, Ribas and Glaspy, who have worked so hard to bring this about.”