Bill Bushnell now has two birthdays—the day he was born and the day he was reborn. Bushnell never expected to be reborn. Diagnosed in May 2005 with stage IV metastatic melanoma, his prognosis was not good. The cancer had spread to his lungs by the time doctors found it. Surgery at first appeared to be an option, but there were two many nodules, three in one lung and two in the other. 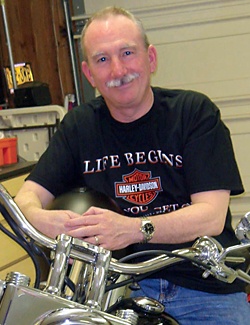 Left with few other choices, Bushnell underwent chemotherapy but did not respond. More conventional treatment wasn’t an attractive option for the 55-year-old Cardiff-by-the-Sea resident and didn’t offer much hope for a cure, so he decided to consult with UCLA oncologist Dr. John Glaspy and then join a leading-edge clinical trial at UCLA’s Jonsson Comprehensive Cancer Center. He hoped it would help him, but if it didn’t, at least he was doing his part to move cancer research forward.

“When faced with the type of odds I was facing... it caused me to go back and reflect on my life,” said Bushnell, who is general manager for a Toyota dealership in Carlsbad. “If I could do anything for someone else through this process and we could get closer to a cure for this hideous disease, I felt that whatever the outcome was for me, it would be in some way positive.”

Although he held out little hope, Bushnell enrolled in a study led by Dr. Antoni Ribas that paired two experimental approaches to beat his disease. As always, his wife, Maxine, was at his side.

“Luckily, Bill was able to get into the clinical trial. They told us about it and it all was kind of a blur then because we didn’t really know anything,” said Maxine, who married her husband just one year before his diagnosis. “The percentages they gave us for success were not good.” In fact, Ribas told them the experimental treatment probably wouldn’t work.

The trial required the Bushnells to be at UCLA at least twice a week for three months. The long drive from San Diego County was taxing, but they wanted the best care. The clinical trial was testing two experimental drugs, a dendritic cell vaccine and an antibody. The goal was to teach the immune system to recognize and kill Bushnell’s melanoma cells, which carried a specific marker or protein called MART-1.

Dendritic cells are a type of blood cell that specializes in stimulating the immune system. They don’t directly fight cancer. Instead, they teach other cells in the body to seek out cancer cells with the MART-1 protein and destroy them. In effect, the vaccine functions as an “on” switch for the immune system. For the study, dendritic cells were grown in the laboratory from Bushnell’s blood and loaded with the MART-1 protein.

The second component of the protocol was an antibody called tremelimumab, which binds and blocks to a protein called CTLA-4. CTLA-4 is found on the surface of certain white blood cells and acts as an “off” switch or brake for the immune system, so the antibody would release this brake.

The rationale for combining the drugs is to turn on the immune system with the dendritic cell vaccine and then block the off switch, the CTLA-4, with the antibody tremelimumab. Hopefully, Ribas said, the combination of the two therapies would result in a greater activation of the immune system against the melanoma cells.

“When I came up the next time, the mole was gone,” Bushnell said. “Dr. Ribas said the treatment was really working.”

A series of scans was scheduled to monitor the lesions in Bushnell’s lungs. Over time, they could see the lesions were shrinking.

Bushnell was told to come back in February 2006 for further follow-up. What the Bushnells walked into that day was more like a party than an appointment with an oncologist.

“I remember we walked in and there were a bunch of people in the room: Dr. Ribas, Dr. Glaspy, nurses and study coordinators,” Bushnell recalled. “Then they shared with me in that room that it appeared there was no sign of cancer other than a little bit of scar tissue in my lungs.”

“The day in the clinic, when we learned that his lung metastases were regressing, it was like a party,” Ribas said. “Everyone was very happy.”

It’s been more than three years since that day and Bushnell remains cancer free. These days, he celebrates two birthdays.

“My real birthday is Feb. 9, and my appointment on that day was Feb. 6. Now I call Feb. 6 my new birthday. I really started my new life that day,” Bushnell said. “I can’t share enough what that emotion was like, when they told me the cancer appeared to be gone. We were planning a funeral, and now we are figuring out what we’re going to do with our lives. Every meal is a banquet and every day is a holiday. I used to say those words, but I didn’t mean them. Now I really am experiencing that. I can’t tell you how great that is.”