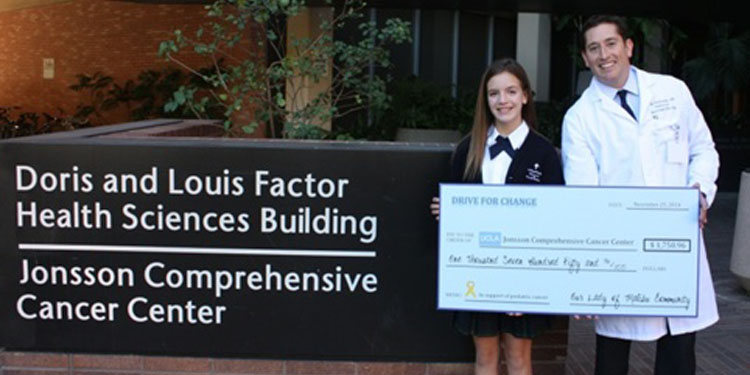 When 15-year-old Mafalda von Alvensleben was diagnosed in August 2014 with Ewing’s Sarcoma, one of the rarest forms of pediatric cancer, she was heartbroken as there is no known family history of the disease.

A month later her former schoolmate, Jillian Neuner, moved Mafalda, now a student at Crossroads School of Arts and Science, again to tears again after she decided to raise money on behalf of the ninth grader to fund further research and awareness about the disease.

Ewing’s Sarcoma causes a tumor to grow in the bone or soft tissue around the bone, and sometimes doctors mistakenly misdiagnose the cancer as a sports injury.

In Mafalda’s case the tumor was discovered in her right femur and was pushing against the muscle, which caused excruciating pain and forced her to use crutches. Thankfully, doctors at UCLA caught the disease early (stage 1 diagnosis) and began treatment immediately.

“After chemotherapy and radiation, I will undergo surgery in February to remove the bone causing problems,” said Mafalda. “My doctor will replace it with a donor bone and I should regain 100 percent mobility.”

This form of cancer mainly affects adolescents and adults in the second decade of life, just over 400 cases of Ewing’s Sarcoma are diagnosed every year in the United States.

“I realized I wanted to do something that showed we supported her,” said Jillian.

The eighth grader at Our Lady of Malibu School did some brainstorming with her father and decided to work with the Jonsson Cancer Center Foundation at UCLA to organize a coin drive in November 2014 in honor of Mafalda.

“We were thinking there’s probably a can of coins in everyone’s home that’s not going to be used, it’s just going to collect dust,” said Jillian. “So we asked students to bring it to school, we rolled all the coins up and donated the money to the UCLA Jonsson Comprehensive Cancer Center.”

The teen exceeded her $400 fundraising goal in just one week thanks to her church and classmates. The eighth grader has this advice for others who want to make a difference in someone else’s life.

“Be confident and set a small goal and the community will come together and they will support your cause,” said Jillian.

“The donation will help to further along the efforts to develop new targeted cancer therapies for these aggressive bone and soft tissue cancers,” said Federman, UCLA associate professor in the departments of pediatrics and orthopedics. “Jillian is clearly special and I hope that this quality that she has motivates all of those around her including myself to serve the community, to be philanthropists, and to help others in any way we can.”

“It’s not about me, but, I’m glad I inspired Jillian, or gave her the incentive to want to do something,” said Mafalda. “This is a very serious disease, and raising awareness and funds for Ewing’s Sarcoma research is just great.”