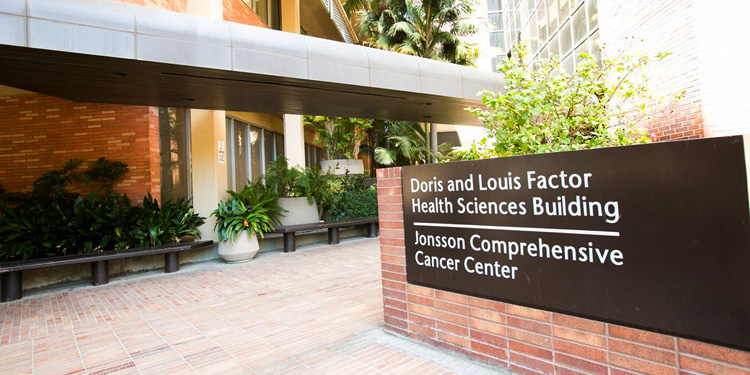 At the UCLA Jonsson Comprehensive Cancer Center, our award-winning researchers have set an admirable pace to establish themselves in a rapidly changing field. Numerous successful targeted therapies were developed based on basic science done in UCLA laboratories and later clinical research with UCLA patients.

Dr. Dennis Slamon discovered the relationship between the HER-2/neu gene and an aggressive form of breast cancer found in about 30 percent of patients. This discovery led to the development of the new breast cancer drug Herceptin, approved by the FDA on September 25, 1998, making it the first approved treatment that attacks cancer at its genetic roots. Slamon has been honored for his efforts by the National Breast Cancer Coalition, Americans for Medical Progress and the American Association for Cancer Research.

Developed by Dr. Antoni Ribas, Keytruda is the first-of-its-kind immunotherapy approved by the FDA on September 14, 2014, to treat advanced melanoma. Formerly known as MK-3475, Keytruda is an antibody that targets a protein called PD-1 that is expressed by immune cells. The protein puts the immune system's brakes on, keeping its T cells from recognizing and attacking cancer cells. Signaling a paradigm shift in the way the deadly skin cancer is treated, the research was conducted at UCLA and 11 other sites all over the world as part of the largest phase 1 clinical study in the history of oncology.

Building upon Ribas' research, Dr. Edward Garon led the largest study published to date using immunotherapy to treat lung cancer, leading to approval by the FDA on October 2, 2015, for use of Keytruda in advanced non-small cell lung cancer (NSCLC).  (The disease  is the leading cause of cancer deaths worldwide.) Because so many of the patients in the study showed significant long-lasting responses, in October 2014 the FDA granted the drug "breakthrough therapy" status for use in NSCLC, allowing it to be fast-tracked for approval.

In a historic year for the Jonsson Cancer Center, 2014–2015 also saw UCLA researchers pioneer two additional therapies approved by the FDA. Garon was the principal investigator on a multi-year, international phase 3 clinical trial of Cyramza. Tested on more than 1,200 patients, the drug was found to extend survival significantly in NSCLC and approved by the FDA on December 12, 2014. Slamon and Dr. Richard Finn developed IBRANCE, a groundbreaking new treatment strategy to arrest tumor growth in women with estrogen-receptor positive advanced breast cancer. It was approved by the FDA on  February 3, 2015.

JCCC was one of three sites nationwide to conduct the first human tests on Gleevec, a once-a-day pill for a common form of adult leukemia called chronic myelogenous leukemia (CML). Much of the pioneering work done to link the Bcr-Abl gene and its mutant protein with CML was done at the UCLA Jonsson Comprehensive Cancer Center by Dr. Owen Witte, a professor of microbiology, immunology and molecular genetics and a renowned investigator with the Howard Hughes Medical Institute. The findings served as a basis for the evolution of Gleevec, a molecularly targeted therapy that attacks the mutant Bcr-Abl protein. Dr. Charles Sawyers, who participated in Witte´s research, conducted early-phase clinical trials of Gleevec at UCLA as well as later studies of CML patients in myeloid blast crisis, the final stage of the disease that is usually fatal within four to six months. Gleevec, developed by Novartis Pharmaceuticals Corp., also is being studied as a possible treatment for gastrointestinal stromal tumors.

Drs. Sanjiv Sam Gambhir, Jorge Barrio, Simon Cherry, Harvey Herschman, Michael Phelps and Nagichettiar Satyamurthy were the first to develop a novel technology that essentially renders the body transparent and allows physicians to determine whether gene therapies reach targeted cells and work as they should. Using a specially designed "reporter" gene and positron emission tomography (PET) scanners to establish pictures of gene therapies at work in the body, UCLA researchers test the tracking system in prostate cancer patients and work with researchers at other institutions to help them evaluate other gene therapy studies for cancer patients.

Dr. Fred Eilber developed a limb salvage technique that now serves as a national model. He treats sarcoma patients with chemotherapy before surgery, avoiding limb amputation that would otherwise be required.

Dr. Judith C. Gasson and her colleagues purified GM-CSF, the first human growth factor ever purified, which shortened from about five weeks to two weeks the time it takes for cancer patients to recover their white blood cell counts after bone marrow transplants.

JCCC opened the first multidisciplinary breast cancer center on the West Coast, the Revlon/UCLA Breast Center, which provides in one location a comprehensive program for women with breast problems and those at high risk of developing breast cancer.

Dr. John Glaspy demonstrated for the first time that dietary regulation of certain fatty acids can change the composition of human breast tissue in such a way that it may be more resistant to cancer.

Dr. Charles Sawyers developed the first animal model for prostate cancer. Previously, there was no way to grow prostate cancer tumor cells outside a patient's body. The ability to grow those cells in animals provided researchers with a crucial new tool.

For more information about our cancer clinics and services, visit the Receiving Patient Care section of this website. To learn more about clinical trials and research studies, visit the Enroll in a Clinical Trial section. And click here to learn about the history of the UCLA Jonsson Comprehensive Cancer Center as a National Cancer Institute designated cancer center, and how we are accelerating discoveries to treat and cure cancer.