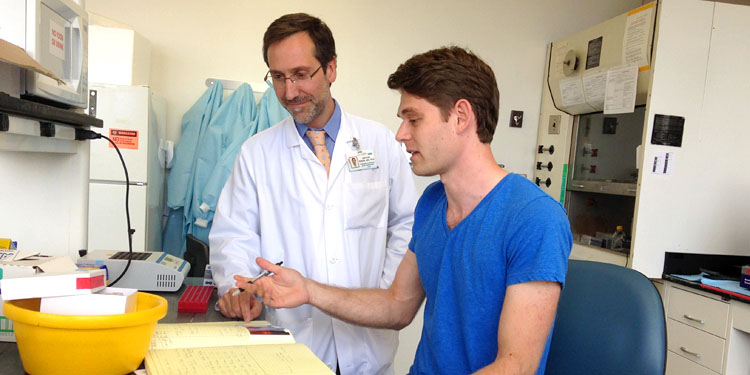 UCLA researchers have for the first time identified mechanisms that determine how advanced melanoma can become resistant to immune checkpoint inhibitors, a discovery that could lead to the development of new and improved treatments for the deadliest type of skin cancer.

Immunotherapy using the anti-PD-1 antibody pembrolizumab (brand name Keytruda) has revolutionized the treatment of advanced melanoma. But a minority of patients who respond to treatment still experience reappearance and progression of their tumors, said Dr. Antoni Ribas, a professor of hematology and oncology, and director of the UCLA Jonsson Comprehensive Cancer Center Tumor Immunology Program.

“The tremendous promise of immunotherapy is to engage our body’s immune defenses to fight cancer, but the results must be long-lasting,” Ribas said. “We have now identified for the first time mechanisms that cancer cells can use to avoid recognition by the immune system’s T cells and decrease sensitivity to their attack.”

The study is published online in the New England Journal of Medicine.

Led by Ribas and Jesse Zaretsky, the study’s first author and a doctoral student in Ribas’ lab, the researchers analyzed biopsies of melanoma tumors from patients that received pembrolizumab. The team compared pairs of tumors, both before the patients started treatment and after relapse, which occurred several months to years later.

Among the four pairs of biopsies studied, the team found one tumor lost a gene called B2M, resulting in a change in how the cancer is recognized by the immune system. Two additional tumors developed defects that disrupted the function of genes JAK1 or JAK2, which limited the effectiveness of the immune system to kill cancer cells.

“We discovered that while the immune system’s T cells remained active, new alterations in JAK1 and JAK2 caused the tumor to become selectively deaf to the signals they were sending that normally tell the cancer cells to stop growing, while genetic changes in B2M decreased the ability of the immune system to recognize the cancer in the first place,” Zaretsky said. “These findings can help open up a whole new potential area of research and allow us to better understand acquired resistance to these promising treatments.”

The team also found a fourth pair of biopsies that did not have either of these genetic variations, which indicates that other mechanisms to escape immunotherapies may be discovered in the future, said Zaretsky, who is currently enrolled in the UCLA-Caltech Medical Scientist Training Program.

Ribas’ team next plans to develop pre-clinical models to further examine these genetic alterations. As scientists learn what these mechanisms of tumor resistance are, they can combine inhibitor drugs that block multiple resistance routes and eventually make the tumors shrink for much longer, or go away completely, Ribas said.

This research was supported by the National Cancer Institute, Stand Up To Cancer and private philantrophy.