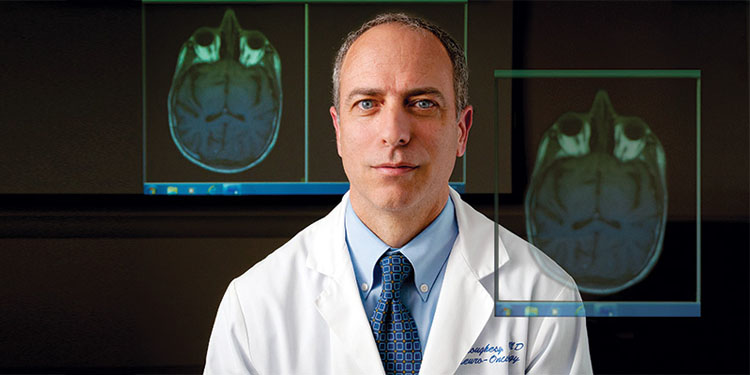 Doctors at UCLA, Cleveland Clinic, University of California San Diego School of Medicine and additional institutions have achieved a milestone in development of a treatment for people with recurrent brain cancers including glioblastoma, the most common and aggressive form of brain cancer, by successfully demonstrating a modified virus can extend the lives of patients with this deadly disease.

The results of the study were published on June 1 in the journal Science Translational Medicine.

Glioblastomas are the most deadly of all brain cancers. If the tumor recurs following chemotherapy and radiation, there are very few treatment options left, and patients have only months to live.

In a phase I multi-center clinical trial, the researchers found that, of the 43 participants who were given the investigational treatment Toca 511 and Toca FC, overall survival increased to 13.6 months compared to 7.1 months for an external control. For some patients, survival was extended to more than two years with few side effects.

This year, the total number of newly diagnosed high-grade glioblastoma will be about 160,000 worldwide, including 14,000 in the United States.

The new findings were led by Drs. Timothy Cloughesy, a member of the UCLA Jonsson Comprehensive Cancer Center and director of the UCLA neuro-oncology program, and Michael A. Vogelbaum, professor of neurosurgery and associate director of the brain tumor neuro-oncology center at the Cleveland Clinic. Their work is the first publication of clinical data involving this new type of modified virus known as a retroviral replicating vector (RRV).

RRVs can deliver a therapeutic gene with a specific function to a cancer cell, and insert it, thereby enabling cell killing. The use of RRVs holds promise in the development of innovative new therapies for many types of cancer including brain cancers.

“For the first time, this clinical data shows that this treatment, used in combination with an antifungal drug, kills cancer cells and appears to activate the immune system against them while sparing healthy cells,” said Cloughesy, who is also a consultant for trial sponsor Tocagen, a private biopharmaceutical company. “This approach also has potential in additional types of the disease such as metastatic colorectal and breast cancers.”

During the first step of treatment the patient is given an injection of Toca 511, which is a modified virus that selectively infects actively dividing cancer cells and delivers a gene for an enzyme called cytosine deaminase (CD) to the cancer cells. As it spreads through the tumor, Toca 511 programs the cancer cells to make (CD). Once they do, the cancer cells are then ready for the second step of the treatment.

Next, the patient is prescribed oral cycles of Toca FC, an antifungal drug, for seven days, every four to eight weeks. The genetic changes created by Toca 511 allows infected cancer cells to convert Toca FC into the FDA-approved anticancer drug, 5-fluorouracil (5-FU). As a result, infected cancer cells and cells that help tumors hide from the immune system are selectively killed, subsequently activating the immune system to recognize and kill cancer cells, while leaving healthy cells unharmed.

In other words, the therapies work together to attack brain cancer cells from the inside.

“Brain cancer is a deadly disease, and when it returns there are extremely few treatment options and survival is usually measured in months,” said Dr. Michael Vogelbaum. “The collective results from this virus study, include encouraging survival and excellent safety data, support the ongoing randomized Phase 2/3 trial called Toca 5 and offer hope for a new treatment option for patients with brain cancer.”

An estimated forty-percent of study participants who received higher doses of the combo treatment during the phase I clinical trial were still living after two years. The researchers also noted that some study participants had partial or complete shrinkage of their tumor which has lasted for over a year or longer and are still doing well. Importantly, Toca 511 & Toca FC demonstrated a favorable safety and tolerability profile.

“In some of my own patients, I have observed dramatic responses to this therapy,” said Carter, a co-author of the study. “We envision future applications where an entire panel array of anti-cancer genes could be delivered by this retrovirus platform."

Previous findings published in 2012 and co-authored by Dr. Noriyuki Kasahara, a former UCLA researcher and member of the UCLA Jonsson Comprehensive Cancer Center, showed in preclinical studies that RRVs could be used to selectively infect cancerous tumors while reprogramming them with therapeutic genes that could be used to kill cancer and provide long term survival.

Based on the new clinical findings, the research has recently moved into a phase 2/3 international clinical trial, called Toca 5, for patients with recurrent glioblastoma or anaplastic astrocytoma. More information about the trial can be found by searching clinicaltrials.gov using the clinical trial identifier NCT02414165.

About the UCLA Jonsson Comprehensive Cancer

The UCLA Jonsson Comprehensive Cancer Center has more than 450 researchers and clinicians engaged in disease research, prevention, detection, control, treatment and education. One of the nation's largest comprehensive cancer centers, the Jonsson center is dedicated to promoting research and translating basic science into leading-edge clinical studies. In July 2015, the Jonsson Cancer Center was named among the top six cancer centers nationwide by U.S. News & World Report.

About the Cleveland Clinic

The Cleveland Clinic is a nonprofit multispecialty academic medical center that integrates clinical and hospital care with research and education. Located in Cleveland, Ohio, it was founded in 1921 by four renowned physicians with a vision of providing outstanding patient care based upon the principles of cooperation, compassion and innovation. Cleveland Clinic has pioneered many medical breakthroughs, including coronary artery bypass surgery and the first face transplant in the United States. U.S.News & World Report consistently names Cleveland Clinic as one of the nation’s best hospitals in its annual “America’s Best Hospitals” survey.