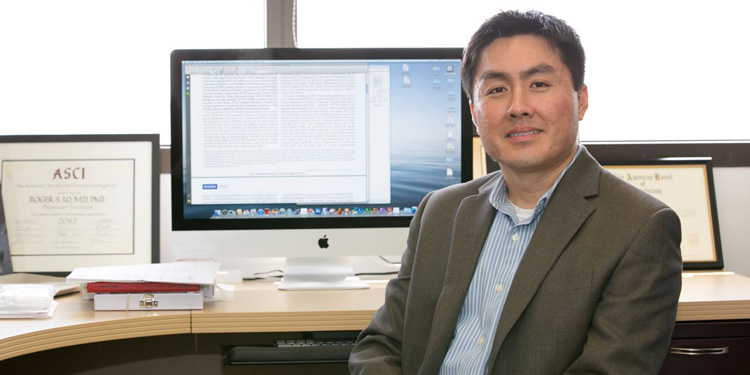 Immunotherapy using anti-PD-1 antibodies has revolutionized the treatment of advanced melanoma and a growing list of other cancers. But 60 to 70 percent of patients’ melanoma tumors are resistant to the anti-PD-1 antibodies, and there is an urgent need to understand how to identify patients who will and will not respond to this therapy and ultimately improve the response rates.

A new study by UCLA researchers has revealed how patterns of gene mutations and expression in a melanoma tumor before starting anti-PD-1 immunotherapy may forecast whether the tumor would shrink or the patient would derive survival benefits.

The study will be published online March 17 by the journal Cell.

Anti-PD-1 antibodies (such as pembrolizumab/Keytruda® and nivolumab/Opdivo®) target the protein PD-1, which is a negative receptor expressed by immune cells which turns them off. Some tumors evade an immune response by expressing the ligand to PD-1 (called PD-L1). When PD-1 binds to PD-L1, it protects the cancer cells from immune cell attack. So, by blocking the interaction between PD-1 and PD-L1, anti-PD-1 antibodies unleash the patient's immune system to attack the cancer.

Dr. Roger Lo, the study’s lead author and a UCLA Jonsson Comprehensive Cancer Center member, analyzed melanoma tumors from patients before anti-PD-1 therapy. The samples were subsequently divided into two groups, based on whether those patients responded or failed to respond to treatment. The researchers then sought to assess the “on” or “off” status of a tumor cell’s genes by detecting their mutational rates and/or gene expression levels.

The degree to which genes and groups of genes are turned on or off has a major influence on whether a tumor will respond to or resist a drug, said Lo, an associate professor in the departments of medicine (dermatology), and molecular and medical pharmacology at UCLA.

“Once we observed how groups of genes were expressed at different levels between the responding versus non-responding tumors, we could compute the biological processes these genes likely participate in to promote resistance,” Lo said. “This anti-PD-1 resistance-associated gene expression pattern defined a signature which was also detected across other common cancers of the lung, colon, kidney and pancreas.”

“We are rapidly advancing our knowledge of why some patients respond to anti-PD-1 immunotherapies and others do not,” said co-investigator Dr. Antoni Ribas, professor of medicine and director of the tumor immunology program at the Jonsson Cancer Center. “Anti-PD-1 therapies are among the greatest recent advances in cancer treatment as they show activity in 15 different types of cancers leading to long-lasting tumor responses, but they only work in a subgroup of patients. Understanding who is likely to respond or not will allow developing personalized immunotherapy to decide which patients can be treated with anti-PD-1 or require a combination strategy.”

From other computational experiments, the investigators also found that tumors with more mutations were associated with longer patient survival after anti-PD-1 therapy. And in a surprise discovery, Lo’s team found that another common therapy for advanced melanoma that utilizes small molecules to turn off a specific pathway activated by the BRAF mutation can induce processes inside a tumor similar to those associated with anti-PD-1 resistance.

Lo said the discovery suggests that, despite the potential of BRAF and PD-1 targeted combination therapies to deliver further improvements in patient survival, future development of this approach should consider the altered immune microenvironment brought on by BRAF targeted therapy.

The researchers hope the overall study findings have the potential to help explain why people battling the disease respond differently to or derive different degrees of long-term benefit from this type of treatment. These findings will certainly open up new research into ways to improve response rates to PD-1 antibodies. Lo’s team plan to begin validating significant associations discovered in this group of patients, and design predictive assays to help physicians stratify patients for PD-1 antibody therapy.