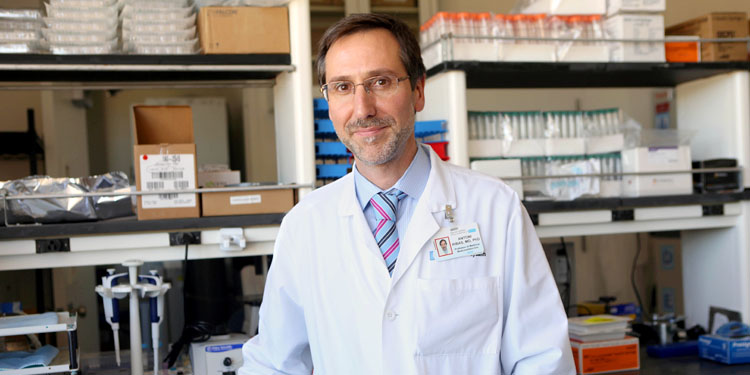 A first-of-its-kind (anti-PD-1) immunotherapy was approved today by the U.S. Food & Drug Administration as first-line treatment for metastatic melanoma, allowing greater access to this therapy for patients without having to previously receive other prior treatments.

Pembrolizumab (marketed under the brand name Keytruda) originally received accelerated approval by the FDA in 2014 for metastatic melanoma. Until recently, pembrolizumab was only given to patients who were no longer responding to ipilimumab, the current standard first-line therapy for people with the disease. Ipilimumab works similarly to pembrolizumab by binding to another immune molecule, called CTLA-4, which also blocks T cell activity.

This approval is based on the results of a recent study by Ribas and a team of researchers from 16 countries who found that pembrolizumab, compared to ipilimumab, has less severe side effects, improved tumor responses, enhanced the duration of responses, and extended the patient's life.

As part of a phase III clinical trial, Ribas and colleagues enrolled 834 patients with metastatic melanoma who were randomly assigned to pembrolizumab and ipilimumab. The team assessed treatment responses by two criteria, progression-free survival (PFS, or the length of time before a patient's cancer worsens) and overall survival. Ribas and colleagues also assessed patient overall response rate to treatment and safety.

Results showed that after six months, 45 percent of those taking pembrolizumab, compared to 26 percent administered ipilimumab, responded to therapy (representing a 42 percent improvement in progression free survival for patients on pembrolizumab). Overall survival at one year for patients who received pembrolizumab was 74 and 68 percent in two study groups, compared with 58 percent for those who received ipilimumab (representing an improvement of 34 percent).

The study was published in the New England Journal of Medicine in April 2015.