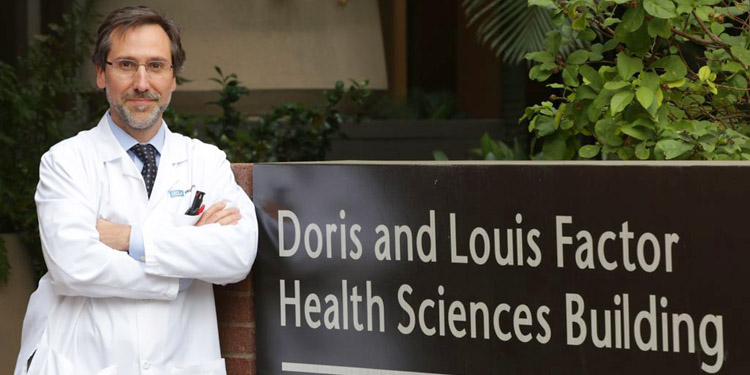 A UCLA researcher at the Jonsson Comprehensive Cancer Center has helped pioneer a new therapy that combines the drug Zelboraf® with an experimental drug cobimetinib, allowing metastatic melanoma patients to live longer and without the harsh side effect of a secondary skin cancer seen in some patients prescribed Zelboraf alone.

In a new study co-authored by Dr. Antoni Ribas, UCLA professor of medicine (hematology and oncology) and JCCC member, researchers found that the BRAF mutation gives melanoma the signal to grow continuously as a cancer. Zelboraf taken by itself it cannot completely block that signal, but when cobimetinib is added, the combination forces the melanoma to respond better.

The scientific basis of this combination is based on prior studies by Dr. Roger Lo, associate professor of medicine (dermatology) and JCCC member, who had described the mechanisms of how melanoma became resistant to Zelboraf and the addition of a drug-like cobimetinib would prevent these mechanisms.

In addition, previously researchers had discovered that a harsh side effect of a secondary cancer had developed in 25 percent of patients who had been given Zelboraf alone.

“We wondered why it was that we were getting the melanoma to shrink, but another skin cancer was developing,” said Ribas.

It turned out that giving cobimetinib in combination with Zelboraf decreased this important side effect.

An estimated 70,000 new cases of melanoma are diagnosed each year in the United States. Of those, 8,000 people will die of the disease. About 50 percent of patients with metastatic melanoma, or 4,000 people a year, have a mutated protein called BRAF mutation and can be treated with Zelboraf (also known as vemurafenib). The U.S. Food and Drug Administration approved use of Zelboraf in August of 2011.

Dr. Ribas collaborated with 18 other researchers from the United States, Europe, Australia and Russia as last author of the study.

Results of the study also showed the drug combination extended the duration of response to the drug from a median of six months with Zelboraf alone to nine months with the combination.

The data was collected internationally over a one-year period. 495 patients participated at 135 sites in the United States, Australia, New Zealand and Europe. Zelboraf was administered twice daily, in combination with cobimetinib which was taken once a day for 21 days, followed by 7 days off.

Additional results also saw 20 percent of patients still suffer from some side effects, like diarrhea, rash, fatigue and edema while taking both drugs.

The next step is to seek FDA approval for cobimetinib in combination with Zelboraf, in the hopes that patients with BRAF mutated metastatic melanoma will be able to benefit from the drug combination.

The findings were presented during the 2014 European Society for Medical Oncology (ESMO) conference in Madrid, Spain, September 26th–29th.

The study was published online June 19th in The New England Journal of Medicine, and will later appear in the print edition on November 13th.

UCLA's Jonsson Comprehensive Cancer Center has more than 240 researchers and clinicians engaged in disease research, prevention, detection, control, treatment and education. One of the nation's largest comprehensive cancer centers, the Jonsson center is dedicated to promoting research and translating basic science into leading-edge clinical studies. In July 2014, the Jonsson Cancer Center was named among the top 10 cancer centers nationwide by U.S. News & World Report, a ranking it has held for 14 years.

For more information on the Jonsson Cancer Center, visit our website at http://www.cancer.ucla.edu