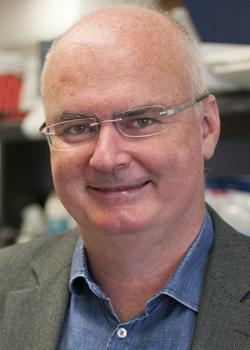 Researchers from UCLA’s Jonsson Comprehensive Cancer Center (JCCC) have discovered that specific types of bacteria that live in the gut are major contributors to lymphoma, a cancer of the white blood cells that are part of the human immune system. The study, led by Robert Schiestl, member of the JCCC and professor of pathology and laboratory medicine, environmental health sciences, and radiation oncology, was published online ahead of press in the journal Cancer Research.

In rodents, intestinal bacteria influence obesity, intestinal inflammation, and certain types of epithelial cancers. Those cancers affect the coverings of the stomach, liver or colon. However, little is known about the identity of the bacterial species that promote the growth of or protect the body from cancer, or about their effect on lymphoma.

Up to 1,000 different species of bacteria (intestinal microbiota) live in the human gut. Intestinal microbiota number 100 trillion cells, and over 90 percent of the cells in the body are bacteria. The composition of each person's microbiome—the body's bacterial make-up—is very different, due to the original childhood source of bacteria and the effects of diet and lifestyle.

Schiestl's group wanted to determine whether differences in peoples' microbiomes affect their risk for lymphoma, and whether changing the bacteria can reduce this risk. They studied mice with ataxia-telangiectasia (A-T), a genetic disease that in humans and mice is associated with a high rate of B-cell lymphoma. They discovered that, of mice with A-T, those with certain microbial species lived much longer than those with other bacteria before developing lymphoma, and had less of the gene damage (genotoxicity) that causes lymphoma.

This work was supported by the National Institutes of Health (NIH), JCCC, the Crohn’s and Colitis Foundation of America, the Eli and Edythe Broad Center of Regenerative Medicine and Stem Cell Research, the Austrian Federal Ministry of Science and Research, NASA, University of California Toxic Substances Research and Teaching Program, and the UCLA Graduate Division.

The Jonsson Cancer Center Foundation, founded in 1945, is the single most important vehicle for raising private funds for cancer research at UCLA. Through activities such as Taste for a Cure and Lifeline Connection, the foundation supports high-priority cancer research efforts aimed at translating laboratory discoveries into more effective and less toxic therapies for cancer patients. UCLA's JCCC has more than 240 researchers and clinicians who are internationally renowned for finding new and better ways to prevent, detect and treat cancer. One of the nation's largest comprehensive cancer centers, the JCCC is ranked among the nation’s top 12 cancer centers by U.S. News & World Report. For more information on the Jonsson Cancer Center, visit our website at http://www.cancer.ucla.edu.