Pancreatic Cancers Use Fructose, Common in a Western Diet, to Fuel Growth 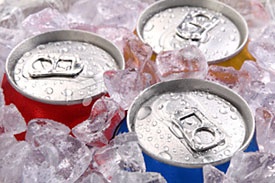 Pancreatic cancers use the sugar fructose, very common in the Western diet, to activate a key cellular pathway that drives cell division, helping the cancer to grow more quickly, a study by researchers at UCLA’s Jonsson Comprehensive Cancer Center has found.

Although it’s widely known that cancers use glucose, a simple sugar, to fuel their growth, this is the first time a link has been shown between fructose and cancer proliferation, said Dr. Anthony Heaney, an associate professor of medicine and neurosurgery, a Jonsson Cancer Center researcher and senior author of the study.

“The bottom line is the modern diet contains a lot of refined sugar including fructose and it’s a hidden danger implicated in a lot of modern diseases, such as obesity, diabetes and fatty liver,” said Heaney, who also serves as director of the Pituitary Tumor and Neuroendocrine Program at UCLA. “In this study, we show that cancers can use fructose just as readily as glucose to fuel their growth.”

The study appeared in the Aug. 1 issue of the peer-reviewed journal Cancer Research.

Sources of fructose in the Western diet include cane sugar (sucrose) and high fructose corn syrup (HFCS), a corn-based sweetener that has been on the market since about 1970. HFCS accounts for more than 40 percent of the caloric sweeteners added to foods and beverages, and it is the sole sweetener used in American soft drinks.

Between 1970 and 1990, the consumption of HFCS in the U.S. has increased over 1,000 percent, according to an article in the April 2004 issue of the American Journal of Clinical Nutrition. Food companies use HFCS—a mixture of fructose and glucose—because it’s inexpensive, easy to transport and keeps foods moist. And because it is so sweet, it’s cost effective for companies to use small quantities of HCFS in place of more expensive sweeteners or flavorings.

In his study, Heaney and his team took pancreatic tumors from patients and cultured and grew the malignant cells in petri dishes. They then added glucose to one set of cells and fructose to another. Using mass spectrometry, they were able to follow the carbon-labeled sugars in the cells to determine what exactly they were being used for and how.

“Traditionally, glucose and fructose have been considered as interchangeable monosaccharide substrates that are similarly metabolized, and little attention has been given to sugars other than glucose,” the study states. “However, fructose intake has increased dramatically in recent decades and cellular uptake of glucose and fructose uses distinct transporters ... these findings show that cancer cells can readily metabolize fructose to increase proliferation. They have major significance for cancer patients, given dietary refined fructose consumption.”

As in anti-smoking campaigns, a federal effort should be launched to reduce refined fructose intake, Heaney said.

“I think this paper has a lot of public health implications,” Heaney said. “Hopefully, at the federal level there will be some effort to step back on the amount of HFCS in our diets.”

Heaney said that while this study was done in pancreatic cancer, these finding may not be unique to that cancer type.

Going forward, Heaney and his team are exploring whether it’s possible to block the uptake of fructose in the cancer cells with a small molecule, taking away one of the fuels they need to grow. The work is being done in cell lines and in mice, Heaney said.

The study was funded by the National Institutes of Health, the Hirschberg Foundation and the Jonsson Cancer Center.

UCLA's Jonsson Comprehensive Cancer Center has more than 240 researchers and clinicians engaged in disease research, prevention, detection, control, treatment and education. One of the nation's largest comprehensive cancer centers, the Jonsson center is dedicated to promoting research and translating basic science into leading-edge clinical studies. In July 2010, the Jonsson Cancer Center was named among the top 10 cancer centers nationwide by U.S. News & World Report, a ranking it has held for 10 of the last 11 years. For more information on the Jonsson Cancer Center, visit our website at http://www.cancer.ucla.edu.
Return to full list >>