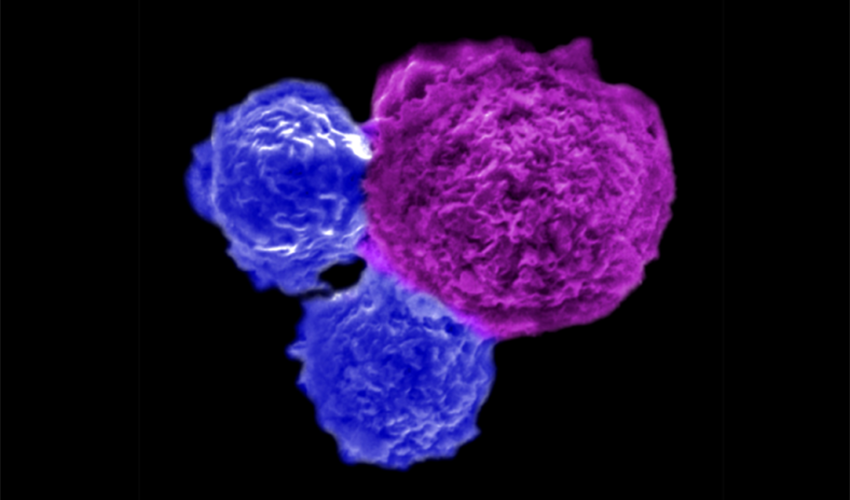 UCLA researchers report a step forward in the development of an “off-the-shelf” cell therapy that could reduce the severity of graft-versus-host disease in people receiving donor bone marrow transplants for the treatment of blood cancers such as leukemia and lymphoma.

The method utilizes rare and powerful immune cells called invariant natural killer T, or iNKT, cells, which can reduce and delay the transplanted donor cells’ attacks on healthy tissue without compromising these cells’ cancer-fighting abilities. The iNKT cells are produced from blood-forming stem cells obtained from donated umbilical cord blood and could potentially be produced in large quantities, stored for extended periods and safely used to treat patients without the need for immune system compatibility.

Allogeneic bone marrow transplants are a common treatment for people with blood cancers like leukemia and lymphoma. After an allogeneic transplant, donor cells kill cancer cells while helping to restore the production of healthy blood and immune cells. Any transplant that involves cells or tissue from a donor carries the risk of graft-versus-host disease, a condition in which the donated immune cells attack healthy tissue.

METHOD
The researchers used a method they developed to produce large numbers of genetically engineered iNKT cells from blood-forming stem cells that had been isolated from donated cord blood. To test the efficacy of these cells at preventing graft-versus-host disease, the researchers divided immune-deficient mice with leukemia or lymphoma tumors into two groups. One was injected with human immune cells and the other was injected with a combination of human immune cells and the genetically engineered iNKT cells.

While the transplanted cells helped both groups of mice clear their tumors, the group that received only immune cells developed severe graft-versus-host disease (both the acute and chronic forms) that caused weight loss, organ damage and ultimately death. The mice that received iNKT cells along with the immune cells lived nearly twice as long as those in the other group and developed slower progressing and less-severe cases of chronic graft-versus-host disease. If the same effect occurs in humans, the researchers say the slower onset of graft-versus-host disease could extend patients’ lives and give them more time for currently available therapies to treat their disease.

IMPACT
The findings identify a potential strategy to make bone marrow transplants safer without disrupting their ability to fight cancer. While the protective effects iNKT cells have against graft-versus-host disease has been observed in patients in the clinic, this discovery has not yielded an available therapy because iNKT cells are so rare. The new study outlines a new method for producing large numbers of iNKT cells from donated cord blood. The researchers estimate one cord blood donation could produce over 10,000 doses of iNKT cells for clinical use.

AUTHORS
Yan-Ruide Li and Samuel Zeng, both UCLA graduate students, are the study’s co-first authors, and the corresponding author is Lili Yang, a UCLA associate professor of microbiology, immunology and molecular genetics and a member of the Eli and Edythe Broad Center of Regenerative Medicine and Stem Cell Research at UCLA and the UCLA Jonsson Comprehensive Cancer Center. Other co-authors are Yang Zhou, Zhe Li, Jiaji Yu, Yu-Chen Wang, Josh Ku, Noah Cook, Adam Kramer, all of UCLA, and Zachary Spencer Dunn of the University of Southern California.

JOURNAL
The study is published online in the journal Science.

This cell therapy strategy is covered by a patent application filed by the UCLA Technology Development Group on behalf of the Regents of the University of California, with Yan-Ruide Li, Jiaji Yu and Lili Yang listed as inventors.