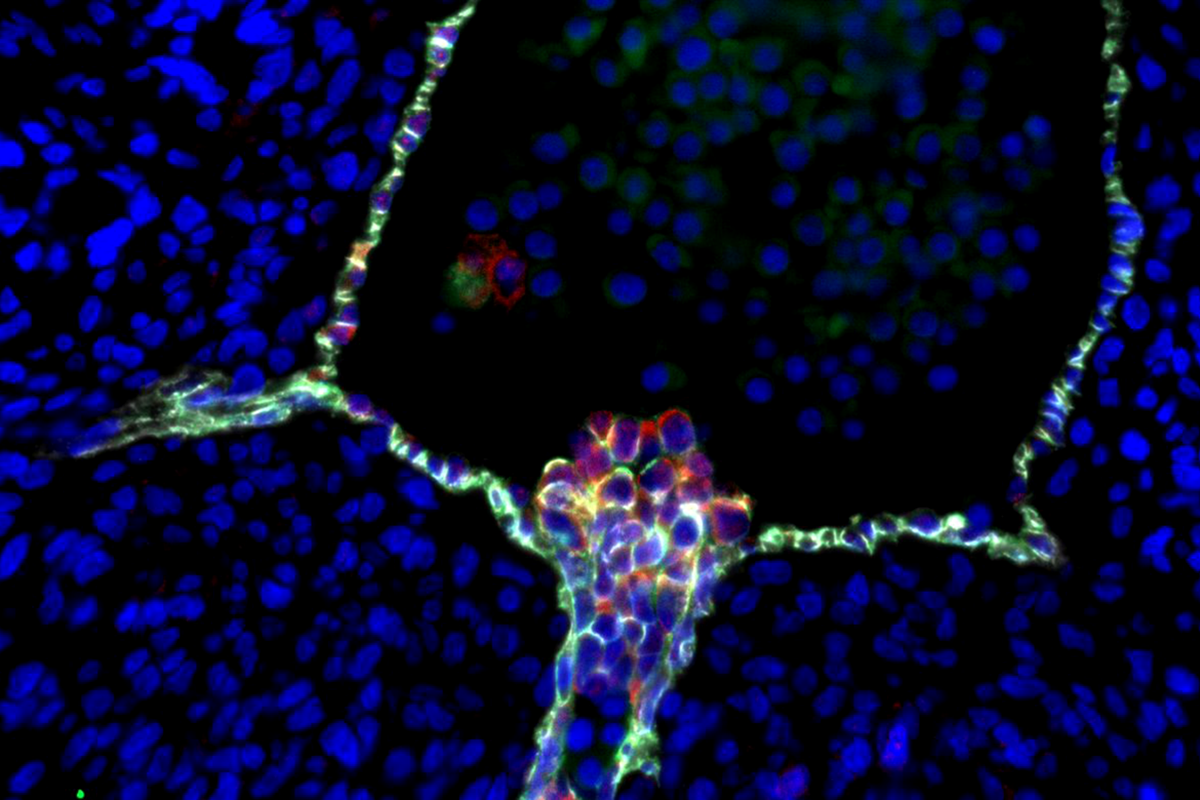 Human blood stem cells emerging from specialized endothelial cells in the wall of an embryonic aorta. UCLA scientists’ confirmation of this process clarifies a longstanding controversy about the stem cells’ cellular origin.

The research, published today in the journal Nature, could help expand treatment options for blood cancers like leukemia and inherited blood disorders such as sickle cell disease, said Dr. Hanna Mikkola of the Eli and Edythe Broad Center of Regenerative Medicine and Stem Cell Research at UCLA, who led the study.

Blood stem cells, also called hematopoietic stem cells, have the ability to make unlimited copies of themselves and to differentiate into every type of blood cell in the human body. For decades, doctors have used blood stem cells from the bone marrow of donors and the umbilical cords of newborns in life-saving transplant treatments for blood and immune diseases. However, these treatments are limited by a shortage of matched donors and hampered by the low number of stem cells in cord blood.

Researchers have sought to overcome these limitations by attempting to create blood stem cells in the lab from human pluripotent stem cells, which can potentially give rise to any cell type in the body. But success has been elusive, in part because scientists have lacked the instructions to make lab-grown cells differentiate into self-renewing blood stem cells rather than short-lived blood progenitor cells, which can only produce limited blood cell types.

“Nobody has succeeded in making functional blood stem cells from human pluripotent stem cells because we didn’t know enough about the cell we were trying to generate,” said Mikkola, who is a professor of molecular, cell and developmental biology in the UCLA College and a member of the UCLA Jonsson Comprehensive Cancer Center.

The new roadmap will help researchers understand the fundamental differences between the two cell types, which is critical for creating cells that are suitable for use in transplantation therapies, said UCLA scientist Vincenzo Calvanese, a co–first author of the research, along with UCLA’s Sandra Capellera-Garcia and Feiyang Ma.

“We now have a manual of how hematopoietic stem cells are made in the embryo and how they acquire the unique properties that make them useful for patients,” said Calvanese, who is also a group leader at University College London. The de-identified data are available to the public on the website The Atlas of Human Hematopoietic Stem Cell Development.

The research team, which included scientists from Germany’s University of Tübingen and Australia’s Murdoch Children’s Research Institute, created the resource using single-cell RNA sequencing and spatial transcriptomics, new technologies that enable scientists to identify the unique genetic networks and functions of thousands of individual cells and to reveal the location of these cells in the embryo.

The data make it possible to follow blood stem cells as they emerge from the hemogenic endothelium and migrate through various locations during their development, starting from the aorta and ultimately arriving in the bone marrow. Importantly, the map unveils specific milestones in their maturation process, including their arrival in the liver, where they acquire the special abilities of blood stem cells.

The research group also pinpointed the exact precursor in the blood vessel wall that gives rise to blood stem cells. This discovery clarifies a longstanding controversy about the stem cells’ cellular origin and the environment that is needed to make a blood stem cell rather than a blood progenitor cell.

Now that the researchers have identified specific molecular signatures associated with the different phases of human blood stem cell development, scientists can use this resource to see how close they are to making a transplantable blood stem cell in the lab.

“Previously, if we tried to create a blood stem cell from a pluripotent cell and it didn’t transplant, we wouldn’t know where in the process we failed,” Mikkola said. “Now, we can place the cells in our roadmap to see where we’re succeeding, where we’re falling short and fine-tune the differentiation process according to the instructions from the embryo.”

In addition, the map can help scientists understand how blood-forming cells that develop in the embryo contribute to human disease. For example, it provides the foundation for studying why some blood cancers that begin in utero are more aggressive than those that occur after birth.

“Now that we’ve created an online resource that scientists around the world can use to guide their research, the real work is starting,” Mikkola said. “It’s a really exciting time to be in the field because we’re finally going to be seeing the fruits of our labor.”

The research was supported by the National Institutes of Health, the UCLA Jonsson Cancer Center Foundation, the David Geffen School of Medicine at UCLA, the Swedish Research Council, the European Molecular Biology Organization, the Swiss National Science Foundation and the UCLA Broad Stem Cell Research Center (including support from the Rose Hills Foundation and the center’s training program).