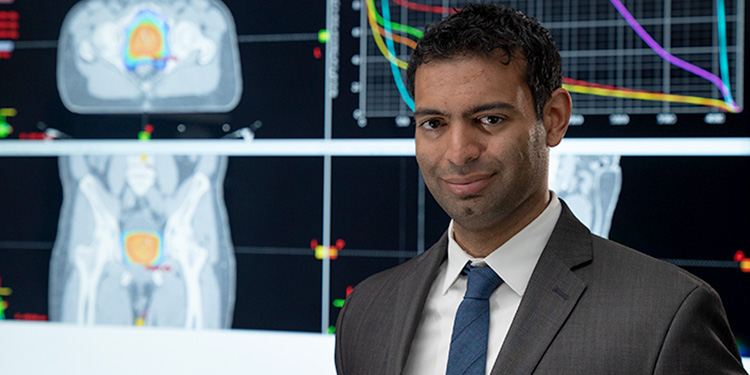 For the first time, researchers led by a team from the UCLA Jonsson Comprehensive Cancer Center used prostate cancer patients’ DNA to create a model that appears to predict who will have side effects from radiation.

While radiation treatment is a very effective therapy for prostate cancer, around one in six men experiences more frequent or painful urination as a lingering side effect, otherwise known as genitourinary toxicity.

These disruptive side effects can occur no matter what type of radiation a patient receives: conventionally fractionated radiotherapy (lower daily doses given over the span of multiple weeks, i.e. long-course), or stereotactic body radiotherapy (higher daily doses given over the span of 10 days, i.e. short-course). In a new study, UCLA Jonsson Comprehensive Cancer Center members Dr. Amar Kishan, lead author and vice chair of clinical and translational research in the Department of Radiation Oncology at UCLA, and Dr. Joanne Weidhaas, senior author and Head of Translational Research in the Department of Radiation Oncology, sought to determine if differences in a patient’s DNA would predict whether they would have genitourinary toxicity after receiving either type of radiation. “One of the biggest goals of our research program is to try to minimize toxicity and improve quality of life after treatment,” Kishan said. “The DNA “differences” we study are perfectly suited to help identify people who will respond differently to cancer therapies, like radiation. These different responses can result in toxicity,” Weidhaas said.

To conduct the study, published online in Radiotherapy and Oncology, Kishan and colleagues analyzed DNA collected from 201 men who received either conventional fractionated radiotherapy or stereotactic body radiotherapy. Using unique differences in the patients’ DNA, the researchers then developed a model for both forms of radiation therapy to see if they could predict which patients would develop side effects.

The study found that the models were highly predictive in differentiating between those who would experience toxic side effects after radiation therapy and those who would not. Furthermore, the models were able to predict toxicity depending on which type of radiation the patient received, long-course or short-course, indicating they could potentially help with decision making in choosing one treatment course over the other.

In an ongoing clinical trial, Kishan is testing this model on a new set of patients to further confirm the study’s findings.  In the trial, the results from the DNA analysis are shared with each patient, and the impact of the information on shared decision making, as well as decreasing toxicity in the group as a whole, is being evaluated.

“This research may ultimately guide a prostate cancer patient’s treatment plan,” said Kishan. "If we can know ahead of time who will tolerate radiation treatment and who may suffer these side effects, we can do a better job of assuring not only the best treatment but the one with least impact on quality of life."