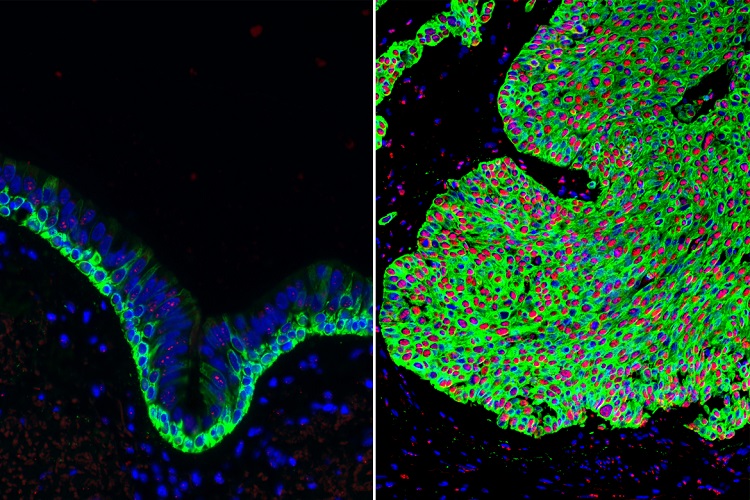 Normal airway tissue, left, and lung cancer tissue, right, with an overabundance of basal stem cells (green). The activated form of beta-catenin (red) in the lung cancer can be targeted by the Wnt Inhibitor Compound 1.

A molecule identified by UCLA researchers helps maintain a healthy balance of cells in airway and lung tissue. If the compound, so far only studied in isolated human and mouse cells, has the same effect in people, it may lead to new drugs to treat or prevent lung cancer.

“We think this could help us develop a new therapy that promotes airway health,” said Dr. Brigitte Gomperts, a UCLA professor of pediatrics and of pulmonary medicine, a member of the Eli and Edythe Broad Center of Regenerative Medicine and Stem Cell Research at UCLA, and lead author of the study. “This could not only inform the treatment of lung cancer, but help prevent its progression in the first place.”

Humans’ respiratory systems are constantly being injured — by pollution and germs in the air we breathe — and must be replenished with healthy cells. That process is driven by airway basal stem cells, which divide to produce both more stem cells and the mucociliary cells that line the airways and lungs.

There are two types of mucociliary cells: mucus cells, which produce the mucus that trap toxic and infectious particles, and ciliated cells, which have finger-like projections that sweep the mucus away to keep the respiratory system healthy and clear. In healthy lungs, airway basal stem cells stay balanced between producing mucociliary cells and self-renewing to maintain a population of stem cells.

In the new study, published today in Cell Reports, Gomperts and her colleagues analyzed airway cells from equal numbers of biopsies of healthy people, people with premalignant lung cancer lesions and people with squamous lung cancer. They discovered that one group of molecules — collectively called the Wnt/beta-catenin signaling pathway — was present at different levels in the basal stem cells of the patient samples versus the cells from healthy people.

And when the researchers altered the levels of these molecules in healthy airway cells from mice, the balance between stem cells and mucociliary cells shifted, mimicking the imbalance seen in lung pre-cancers.

“When you activate the Wnt/beta-catenin signaling pathway, these stem cells just divide and divide,” said Gomperts, who is also a member of the UCLA Jonsson Comprehensive Cancer Center.

Finally, the team screened more than 20,000 chemical compounds for their ability to reverse this effect in human cells, lowering levels of Wnt and restoring the balance of stem cells and mature airway cells.

One compound stood out for its ability to limit the proliferation of basal stem cells and restore the balance of the stem cells and mucociliary cells to normal. The compound was also less toxic to airway cells than other, previously discovered, molecules that block Wnt/beta-catenin signaling. The team named the compound Wnt Inhibitor Compound 1, or WIC1.

“The identification of this new drug is a nice tool to tease apart the biology of the Wnt/beta-catenin signaling pathway and its effects on lung health,” said Cody Aros, the first author of the new paper and a UCLA graduate student. “It’s also very exciting that it may act in a new way than other existing Wnt/beta-catenin signaling pathway inhibitors and has such low toxicity.”

Since WIC1 was identified through a random drug screen, the researchers don’t yet know exactly how it works, but they’re planning future studies on its mechanism and safety.

The compound tested by the researchers was used in preclinical tests only and has not been tested in humans or approved by the Food and Drug Administration as safe and effective for use in humans.

The newly identified compound is covered by a patent application filed by the UCLA Technology Development Group on behalf of the Regents of the University of California, with Gomperts and Aros as co-inventors.

Funding for the study was provided in part by the National Institutes of Health, the National Cancer Institute, the Tobacco Related Disease Research Program and the Broad Stem Cell Research Center Training Program, including support from the Rose Hills Foundation Graduate Scholarship.