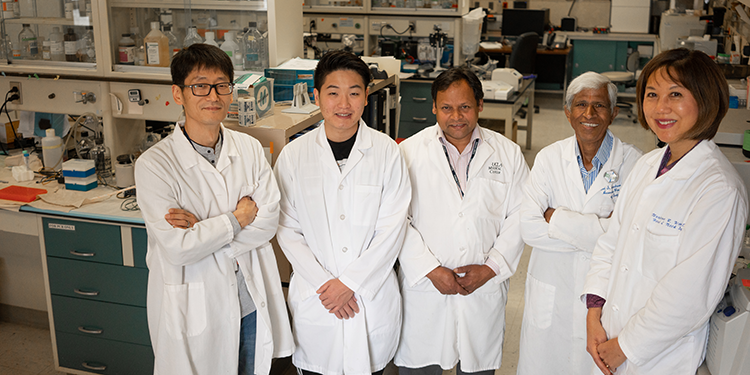 In a UCLA-led phase I clinical trial, a new plant-based drug called APG-157 showed signs of helping patients fight oral and oropharyngeal cancers. These cancers are located in the head and the neck.

APG-157 is made up of multiple compounds produced by plants, including curcumin. UCLA Jonsson Comprehensive Cancer Center researchers found that treatment with this botanical drug resulted in high concentrations of curcumin and its byproducts circulating in the blood and absorbed by tumor tissues within three hours after being taken orally.

APG-157 reduced the concentration of cytokines — proteins involved in inflammation — in the saliva when administered to cancer patients. The therapy also reduced the relative abundance of Bacteroides species, a group of gram-negative bacteria. Gram negative refers to a group of dangerous bacteria that have an outer layer which hides them from the immune system. The relative abundance of gram-negative bacteria compared to the presence of other types of bacteria is correlated with oral cancer.

The treatment did not have any adverse effects on the study’s participants.

BACKGROUND
Cancers of the head and neck account for 4% of all cancers. About 650,000 new cases are reported each year around the world. People with advanced head and neck cancers have a low survival rate and current treatment options such as surgery, radiation and chemotherapy can have adverse effects. Therefore, more effective and less toxic therapies are needed to help improve the quality of life and outcome for those with these cancers.

APG-157 is a botanical drug developed under the FDA’s Botanical Drug Guidance, which includes requirements for production of plant-based therapies that are marketed as prescription medications. The drug is made up of botanical compounds including curcumin from the Curcuma longa plant, which is commonly referred to as turmeric and is a member of the ginger family.

Curcumin is one of the medicinally active or therapeutic molecules that has been tested as a possible treatment to help fight multiple cancers because it is an antioxidant that reduces swelling and inflammation. However, there is poor absorption into the bloodstream when curcumin is taken orally. In this study, UCLA researchers found that when APG-157 is taken through oral mucosal absorption, patients have high levels of curcumin circulating in their blood and absorbed by cancer tissues.

IMPACT
APG-157 is a botanical drug that has low toxicity. It works effectively to reduce inflammation that contributes to the growth of cancer cells. It also attracts T cells to the tumor micro-environment. When used in combination with immunotherapy drugs, APG-157 might have the ability to make the immune system more effective in attacking head and neck cancers. With potential to inhibit the growth of Bacteroides species, APG-157 could also improve cancer therapy through oral microbial changes.

JOURNAL
The research is published online in CANCER, a journal published by the American Cancer Society.

FUNDING
Funding for the study was provided by Aveta Biomics.

DISCLOSURES
Authors Parag Mehta, Sharmila Mudgal and Luis Avila are employed by Aveta Biomics. They had no role in the recruitment of people for this study or the collection and analyses of the samples. They, as with all the authors, did not have any information on the subjects, therapy or placebo given until completion of the study.