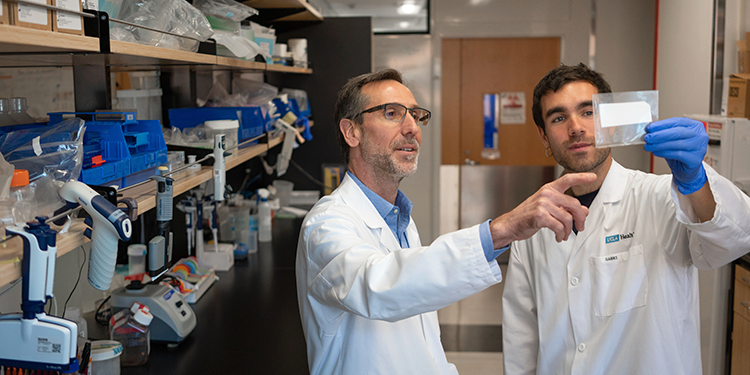 Now, a new study from scientists at the UCLA Jonsson Comprehensive Cancer Center helps explain why some people with advanced cancer may not respond to one of the leading immunotherapies, PD-1 blockade, and how a new combination approach may help overcome resistance to the immunotherapy drug.

The UCLA study, published online in the inaugural issue of the new scientific journal Nature Cancer, showed that genetic and pharmacological inhibition of the oncogene PAK4 overcomes resistance to anti-PD-1 therapy in preclinical models.

“One of the main reasons patients do not respond to PD-1 blockade is because the T cells never make it into the tumor to attack the cancer cells,” said lead author Gabriel Abril-Rodriguez, a doctoral candidate in the departments of pharmacology and medicine in the David Geffen School of Medicine at UCLA, and recipient of the Alan Ghitis Fellowship for Melanoma Research at the JCCC. “We found that biopsies of patients who did not respond to PD-1 blockade showed an overexpression of PAK4, so that led us to believe it played a role in suppressing the immunotherapy treatment.”

PAK4 has been known previously to be involved in cell migration and proliferation. The new research from UCLA demonstrates that high expression of this oncogene also correlates with a lack of immune cells migrating into the tumors to destroy the cancer cells.

Using biopsies from people with advanced melanoma who received the immune checkpoint blocking antibody pembrolizumab, UCLA researchers performed RNA sequencing to characterize the phenotype of the tumors. They saw that the tumors that did not respond to PD-1 blockade had a high expression of PAK4 and were not infiltrated by immune cells, meaning that the immune cells had not found their way to the tumor to attack the cancer cells.

The team then inhibited PAK4 in cell lines by either using a drug inhibitor or a gene editing technique called CRISPR-Cas9. The scientists found that deleting PAK4 increased the migration of tumor-specific immune cells and sensitized tumors to PD-1 blockade immunotherapy, reversing the resistance.

“Developing new and improved combination treatments like this one for people who do not initially respond to anti-PD-1 treatment is the next step forward in our efforts to make immunotherapy work better for more people,” said Dr. Antoni Ribas, the study’s senior author, a professor of medicine at the Geffen School and director of the UCLA Jonsson Comprehensive Cancer Center’s Tumor Immunology Program. “The results from this study could also be expanded to other tumor types that are notoriously resistant to PD-1 blockade, such as pancreatic cancer.”

The PAK4 inhibitor used in the study is already being tested in a phase one trial. The combination treatment with anti-PD-1 will be tested in a clinical trial setting in the near future.

The study was funded in part by the National Institutes of Health and the Parker Institute for Cancer Immunotherapy.