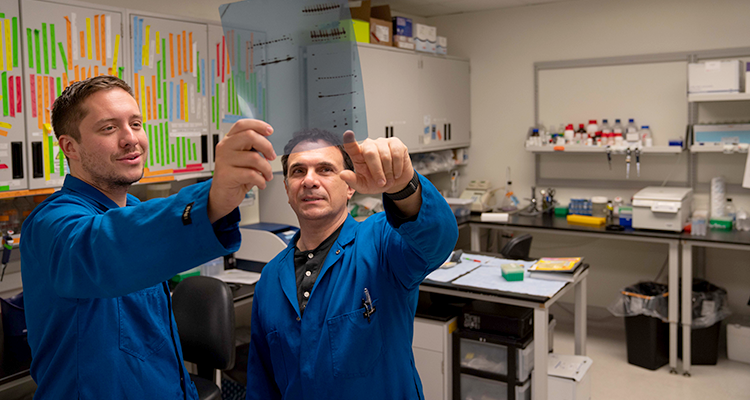 A new screening system developed by scientists at the UCLA Jonsson Comprehensive Cancer Center leverages redundancy in an important component of a cell – nucleotide metabolism – to help identify new drugs that specifically and potently block processes that are essential for cancer cell growth.

BACKGROUND
There are many small molecule kinase inhibitors, such as Gleevec, that have been developed to target cancers and other diseases. However, scientists still don’t fully understand the full effects of these drugs. Current screening methods do not capture the effects these inhibitors may have on other components of cells, such as biochemical metabolic networks. Using their understanding of metabolism, the team designed a new high-throughput screening system that allows for identification of selective inhibitors of metabolic pathways.

METHOD
Working with the Molecular Screening Shared Resource at UCLA, the team performed a large scale analyses of 430 kinase inhibitors that have annotated targets within cellular signaling pathways and many of which are currently being used in the clinic. Unexpectedly, multiple inhibitors were found to block nucleotide metabolism and their targets were revealed using mechanistic studies.

IMPACT
This new metabolism-focused screening approach can be a powerful tool in getting new insight into how existing drugs impact metabolic networks and could potentially provide a new understanding into how these drugs are working in the clinic. In addition to characterization of existing compounds that are already being used for treating cancers and other diseases, this screening method could one day also be applied to identify new small molecule modulators of currently un-targeted metabolic pathways – not only nucleotide metabolism – which can help lead to new drug discoveries.

AUTHORS
The study’s senior author is Dr. Caius Radu, professor of molecular and medical pharmacology and a member of UCLA’s Jonsson Comprehensive Cancer Center. The first authors are Evan Abt, a postdoctoral researcher, and Ethan Rosser, a graduate student, at the David Geffen School of Medicine at UCLA.  Other authors include: Dr. Robert Damoiseaux, professor of molecular and medical pharmacology and director of the Molecular Screening Shared Resources at UCLA; Dr. Arnon Lavie and Dr. Matthew Durst from the University of Illinois at Chicago. Full list of authors are included in the paper.

JOURNAL
The study is published online in Cell Chemical Biology.