For recurrent glioblastoma, immunotherapy before surgery appears to help more than afterward 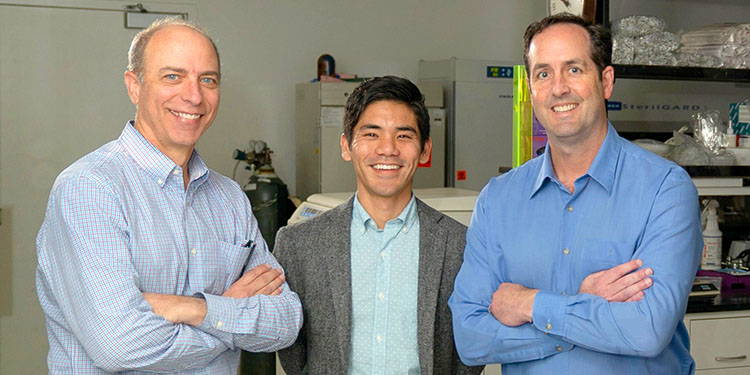 A UCLA-led study suggests that for people with recurrent glioblastoma, administering an immunotherapy drug before surgery is more effective than using the drug afterward.

In recent years, immunotherapy drugs, which harness the body’s immune system to destroy cancer cells, have been shown to be helpful in treating people with advanced or metastatic cancer. But the drugs have yet to show any benefit in helping people with glioblastoma, an aggressive and deadly form of brain cancer. On average, most people with recurrent glioblastoma live for just six to nine months.

The study, published online in Nature Medicine, was co-led by Robert Prins, a professor of molecular and medical pharmacology at the David Geffen School of Medicine at UCLA and Dr. Timothy Cloughesy, a professor of neuro-oncology at the Geffen School of Medicine. Both are scientists at the UCLA Jonsson Comprehensive Cancer Center. It shows for the first time that pembrolizumab, an immune checkpoint inhibitor drug that is marketed under the brand name Keytruda, can be effective in treating people with recurrent glioblastoma.

In the study, people treated with the drug prior to surgery lived nearly twice as long after surgery as the average life expectancy for people with the disease.

Pembrolizumab is an antibody that works by blocking a checkpoint protein called PD-1, which stops T cells from attacking cancer cells. Cancer cells often use PD-1 to keep T cells at bay. But inhibiting the engagement of the protein with a checkpoint inhibitor drug like pembrolizumab enables the immune system to better attack the cancer.

“The results are very encouraging,” said Prins, the study’s senior author. “This is the first hint that immunotherapy can have a clinical benefit for patients with malignant brain tumors —and help prevent future recurrences.”

The trial, which took place at seven medical centers throughout the U.S., evaluated 35 people with recurrent and surgically resectable glioblastoma — meaning the tumors could be removed by surgery. Of them, 16 received pembrolizumab before their surgeries and 19 received the drug afterward.

“By administering the immunotherapy before surgery, we activated the T cells within the tumor that were previously functionally impaired,  which is essentially what helped extend people’s lives,” Cloughesy said.

In a person with cancer, if antigen-specific T cells are present and impaired by the tumor and the surrounding microenvironment, they can be awakened by the drug prior to surgery. In contrast, after surgery, the drug doesn’t stimulate patients’ T cells because those T cells are removed with the tumor.

The findings could be significant because there have been few major advances in the treatment of glioblastoma in the past two decades, and because it could be a step toward developing new biomarkers for the disease.

“This data may lead us to a better understanding of the mechanisms by which some patients generate significant immune responses to this therapy while others do not,” said Prins, who is also a research member of the Parker Institute for Cancer Immunotherapy Center at UCLA. “It can also help us determine which combination of drugs could be most successful for each individual patient.”

The team is now testing the immunotherapy in combination with vaccines and other checkpoint inhibitors.

“This isn’t a very big study, and our data need to be replicated, but we have a foot in the door,” Cloughesy said. “We have found a way to use these checkpoint inhibitors in glioblastoma that we previously thought were ineffective. We now have a rational and logical way to develop immunotherapies going forward and a clinical development process for doing it.”

The study’s co-senior author is Patrick Wen of the Dana-Farber Cancer Institute, and the co-first author is Dr. Aaron Mochizuki, a UCLA pediatric hematology/oncology fellow.