Three professors elected to the American Society for Clinical Investigation 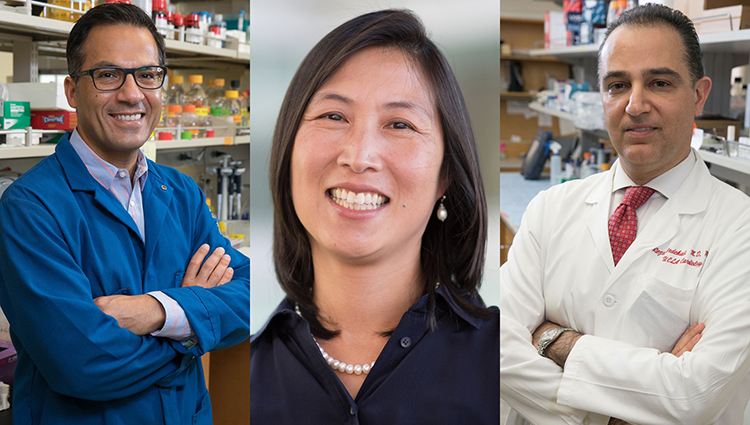 Three faculty members from the David Geffen School of Medicine at UCLA – Dr. Reza Ardehali, Dr. Siavash Kurdistani and Dr. Maureen Su – have been elected as members of the American Society for Clinical Investigation, one of the oldest and most esteemed nonprofit honor societies of physician-scientists.

Ardehali, associate professor of medicine and cardiology and a member of the UCLA Eli and Edythe Broad Center of Regenerative Medicine and Stem Cell Research, treats people with advanced heart failure and studies the molecular processes involved in heart development and disease. His current research is focused on using stem cells to generate cells for transplantation to regenerate the heart by replacing scar tissue and restoring heart function.

Kurdistani, professor of biological chemistry and co-director of the gene regulation program at the UCLA Jonsson Comprehensive Cancer Center, is a research pioneer in cancer epigenetics, a field that studies inherited information other than that encoded in DNA. Kurdistani’s laboratory addresses the function of histones and their post-translational modifications in regulating gene expression, and several of his discoveries have changed the way we view the role of epigenetics in normal and cancer cells. Kurdistani is also a member of the Broad Stem Cell Research Center.

Su, professor of pediatrics and microbiology/immunology and medical genetics, is a pediatric endocrinologist and scientist studying the underlying causes of autoimmune diseases with the goal of developing new therapies to not only treat the condition, but also to prevent it. Along with focusing on autoimmune diseases, Su and her laboratory and developing news ways to harness the autoimmune response to fight off cancer.

Ardehali, Kurdistani and Su are among 80 new members from 46 different institutions that are being honored for their significant contributions made to the understanding of human diseases, both in the laboratory and the clinic.