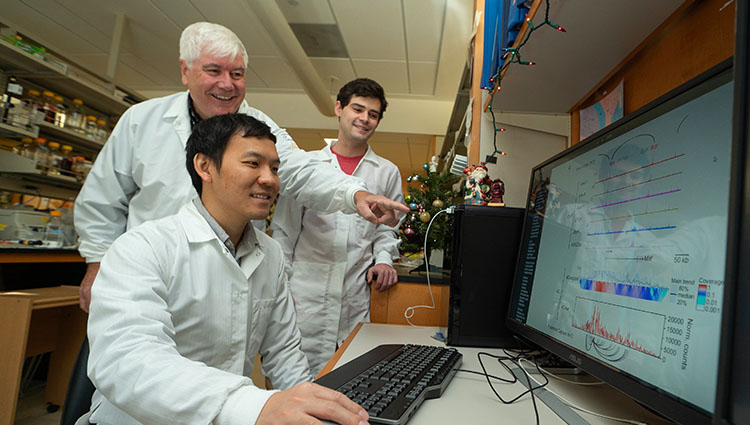 A new study by UCLA scientists shows that enhancers, snippets of DNA that contribute to gene regulation, fall into the same “insulated neighborhoods” or chromatin loops as the target gene and other gene-specific regulatory elements. Knowing how the genes are organized and where promoters and enhancers are located within DNA is important because it gives clues as to how genes and mutations, or single nucleotide polymorphisms outside of the gene, can be associated with cancer and a variety of other diseases.

BACKGROUND
The three-dimensional configuration of the genome is crucial for gene regulation, the process of turning on or off genes. Yet, how the gene unit – metazoan promoters, enhancers and insulators of a gene  – is organized within the genome has been poorly understood. Previously, insulated neighborhoods, a class of chromosomal sub-domains, have been thought to constrain gene regulations within the boundaries, however it has been unclear as to what extent does an enhancer typically function on its nearby genes within an insulated neighborhood.

METHOD
The research team looked at hundreds of genes within different insulated neighborhoods using preexisting data, which was superimposed with an enhancer inactivation strategy to determine whether regulation is constrained within the DNA loop. The team was able to deactivate certain enhancers in mouse embryonic stem cells by depleting a transcription factor that was important for an enhancer function, but not important for stem cell pluripotency. The researchers found that one specific factor, ESRRB, could be depleted without affecting pluripotency as long as you grow the cells with a particular supplement, allowing the team to study enhancers regulated by this major transcription factor without causing cell differentiation.

IMPACT
By knowing the location of a gene unit within an insulated neighborhood, researchers gained insight into how enhancers and genes regulate and communicate with one another. This strategy can help pinpoint mutations, which can be associated with life threatening diseases such as cancer. By discovering mutations earlier, cancers can be found at earlier stages when they are easier to treat and may even open up new avenues for potential treatments.

JOURNAL
The research is published online in Molecular Cell.

FUNDING
The study was supported by the National Institutes of Health, a UCLA Quantitative and Computational Biosciences Collaboratory Post-doctoral Fellowship and a Ruth L. Kirschstein National Research Service Award.