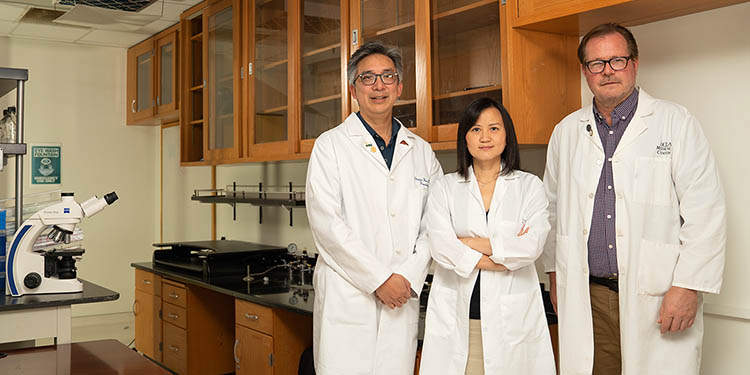 A group of researchers from the UCLA Jonsson Comprehensive Cancer Center received a $3.5 million, five-year grant from the National Institute of Health to create a center dedicated to developing an effective and affordable blood-based cancer-screening test to help detect liver cancer early.

The grant, which is led by Drs. Xianghong Jasmine Zhou, Steven-Huy Han and Samuel French, also all part of the David Geffen School of Medicine at UCLA, helps fill an urgent demand for people who are at risk of developing liver cancer.

“If you can detect any cancer early, it’s much easier to treat – especially for liver cancer,” said Zhou, a professor of pathology and laboratory medicine. “At late stages, you have to have more extensive and expensive treatments and often the response rate is poor. This test we’re creating may predict cancer at a very early stage – maybe even years before it would develop.”

Currently there are no recommended liver cancer screening blood tests, but for people who are at high risk, the standard practice is to use imaging, such as an ultrasound, every six months, which only catches the cancer once it already is formed.

“By having a good blood test that allows us to accurately monitor high risk patients and catch cancer early would really put us ahead of the ball,” said Han, professor of medicine and surgery. “It would be like driving with brighter headlights – you would see the problem way before it was upon you.”

The team’s diagnostic test is based on the DNA methylation patterns of circulating tumor DNA. Circulating tumor DNA carries cancer-specific genetic information, which enables a noninvasive way to diagnosis cancer. By using computational and experimental technologies, the team is hoping it will be able to significantly boost the diagnostic power while dramatically reducing the cost. They have recently published several novel methods, such as CancerLocator and CancerDetector, for the ultra-sensitive detection of cancer.

Also known as a “liquid biopsy,” the screening test will be used in people who have cirrhosis of the liver, which is one of the biggest risk factors for developing liver cancer. The team plans to follow thousands of liver cirrhosis patients for five years, to establish a longitudinal clinical cohort for the development and validation of the screening test.

“We have a unique group of translational and clinical researchers with multi-disciplinary expertise that we hope will help improve the way we diagnose liver cancer and ultimately, decrease the amount of people affected by this disease,” said French, associate professor of pathology and laboratory medicine.

There are more than 42,000 new cases of liver cancer diagnosed each year, which has more than tripled since 1980. The American Cancer Society estimates that 30,000 people die from the disease every year and the death rate has continued to increase for the past 18 years.