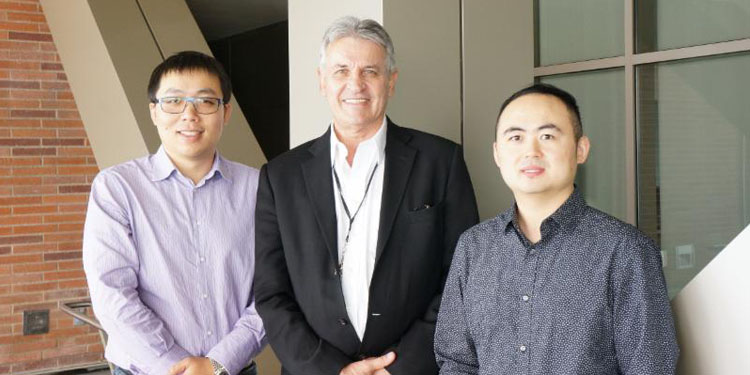 UCLA researchers have developed a nanoparticle delivery system, known as a nanocarrier, which could help ignite the immune system to kill breast cancer tumors. This nano-enabled approach utilizes a combination of drugs that act synergistically to switch on the immune response at the breast cancer site while also preventing immune escape.

Although localized breast cancer treatment is highly successful with a five-year survival rate of around 90 percent, metastatic breast cancer continues to show a high mortality rate.  Despite this bleak picture for metastatic disease, new optimism has emerged for the treatment of solid cancers with the emergence of cancer immunotherapy.  These approaches utilize the power of cancer killing T-cells to destroy primary tumor growth and metastases.

The study, led by Huan Meng and Dr. André Nel, both members of the California NanoSystems Institute at UCLA and the UCLA Jonsson Comprehensive Cancer Center, was published online in ACS Nano. It shows that the efficacy of breast cancer immunotherapy can be enhanced by using a nanocarrier.

The team developed an extremely small lipid-lined vesicle, known as a liposome, to deliver a chemotherapy drug, doxorubicin — or DOX — and a small molecule compound called indoximod. Indoximod interferes in a metabolic immune suppressive pathway, known as the IDO pathway. With this, indoximod prevents a major immune escape mechanism used by the cancer to circumvent tumor killing.

The liposome was smart-designed by conjugating indoximod to a phospholipid, which self-assembles into the liposome. Once assembled, DOX can be loaded inside the liposome. DOX triggers a special form of tumor cell death known as immunogenic cell death, or ICD.

ICD is responsible for the death of cancer cells, providing them with an “eat-me” signal to a group of immune cells called antigen presenting cells. These immune cells engulf the dying cancer cells, which presents tumor antigens to the immune system and leads to the appearance of other immune cells, tumor-infiltrating lymphocytes. With this, ICD provides a mechanism where solid cancers, like breast cancer, can overcome an inherent inefficiency of generating these lymphocytes. These cancers are often labeled as exhibiting a “cold” immune status.

This is not the case for cancers such as melanoma or some forms of non-small cell lung cancer, which frequently exhibit a large quantity of tumor-infiltrating lymphocytes. These lymphocytes allow the cancers to respond to a new class of antibodies known as immune checkpoint inhibitors.  Checkpoint inhibitors have revolutionized the treatment of melanoma by interfering with immune checkpoint “off-switches” that flip the cancer-killing response of T-lymphocytes off.  The team asked if it is possible to use ICD to switch the immune status of breast cancer to immune prime or “hot” —making the cancer responsive to immunotherapy.

The use of a nanoparticle drug carrier delivering doxorubicin and indoximod together leads to the increased appearance of cancer cell killing T-lymphocytes (dark brown) (right), over the control group (left)

“Being able to convert the status of breast cancer from immune ‘cold' to immune ‘hot’ was seen as an effective means of improving cancer immunotherapy for cancers that do not readily respond to treatment with checkpoint inhibiting antibodies or IDO inhibitors,” said Nel, who is a distinguished professor of medicine at the David Geffen School of Medicine at UCLA and research director at CNSI. “The same strategy can also be used for immune responsive cancers, where response rates seldom exceed 20-40 percent.”

As a proof of concept, the scientists injected breast cancer cells into the mammary glands of immune competent mice. With the growth of primary breast cancer tumors, the researchers observed tumor metastasis to the lung, and ultimate mortality.

The team then injected the drug carrying liposomes intravenously to distribute via the bloodstream to the primary and metastatic tumor sites. Results showed increased tumor uptake and effective regional buildup of both DOX and indoximod at the tumor site.  This buildup and synergy could not be achieved by using free drugs.  The encapsulated drug delivery by the nanocarrier also dramatically reduced primary tumor volumes and lung metastases.

“Liposomes are already approved by the FDA and used for delivery of cancer drugs in the marketplace,” said Meng, who is an assistant professor of medicine at the David Geffen School of Medicine at UCLA. “It’s advantageous to use this type of carrier for purposes of future research translation for the treatment of patients with breast cancer.”

Results also showed that the use of the DOX/indoximod combination was highly synergistic and significantly outweighed the effect of free drugs or a liposome only delivering DOX.  In addition, the efficacy of the dual delivery liposome was significantly enhanced when combined with a checkpoint blocking antibody, leading to the elimination of lung metastases.

Another significant advantage of using a nanocarrier was the elimination of DOX toxicity. The encapsulated DOX delivery was accompanied by a dramatic reduction of cardiac, liver, and kidney toxicity compared to the free drug.

“Drug delivery by nanocarriers contributes to improving drug safety which is incredibly important,” said Jianqin Lu, a postdoctoral fellow and first author of the study. “Our study demonstrates the value of using a nanocarrier for combined and synergistic drug delivery in comparison to free drugs. This has significance for clinical translation in human metastatic breast cancer.”

The effective use of ICD along with interference in the IDO pathway was also shown in previous research from the same group to be potentially beneficial in pancreas cancer. It could constitute an effective approach for solid cancers characterized by a “cold” immune status. This ICD approach could also dramatically reduce the cost of treatment with checkpoint inhibitors and antibody treatment side effects.