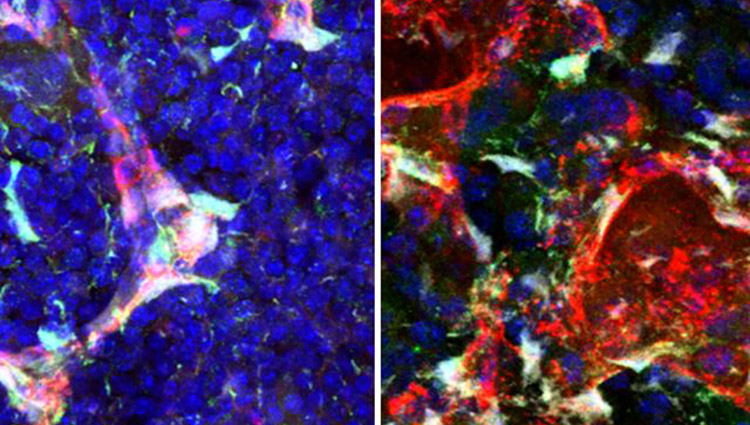 Researchers from the UCLA Jonsson Comprehensive Cancer Center and the UCLA Eli and Edythe Broad Center of Regenerative Medicine and Stem Cell Research have discovered an important distinction in how blood-forming stem cells are supported by their micro-environments during rest and after injury.

The body appears to switch the type of cell that produces a single growth factor during healthy times and during stress or injury — for instance, radiation treatment for cancer. The results could have implications for treating cancer, when people’s blood-forming stem cells may be substantially depleted, and for people undergoing certain types of transplants.

The study, led by Dr. John Chute, a member of the center and a professor of hematology/oncology at the David Geffen School of Medicine at UCLA, was published in the journal Cell Stem Cell.

The UCLA study focused on a growth factor called pleiotrophin, or PTN. Chute and his team had previously discovered pleiotrophin, but had yet to determine which type of cells secrete it.

“In stem cell research, two important questions are, ‘What are the microenvironment cells that regulate stem cells,’ and ‘How do they do it?’” Chute said.

To find out, the team bred mice that lacked pleiotrophin expression in various types of bone marrow cells — including endothelial cells, which line the blood vessels, and stromal cells, which make up connective tissue. The scientists predicted that healthy mice whose endothelial cells did not secrete pleiotrophin would have the poorest bone marrow function. But they found something else.

Next, the team wanted to see if the same would occur true when the animals’ bodies were stressed by radiation.

The results suggest that stem cell maintenance during healthy times is dependent upon the secretion of pleiotrophin by stromal cells; but for regeneration after injury, endothelial cells step in.

“After irradiation, pleiotrophin expression increases in blood vessel endothelial cells,” Chute said. “Although the switch occurs, the reason for the change is a mystery.”

The findings may have implications for chemotherapy and radiation treatment, which deplete bone marrow stem cells.

“These therapies for cancer patients suppress our blood cell systems over time,” Chute said. “It may be possible to administer modified, recombinant versions of pleiotrophin to patients to accelerate blood cell regeneration. This strategy also may apply to patients undergoing bone marrow transplants.”

The other fundamental takeaway is that the behavior and control of blood-forming stem cells under healthy conditions might not apply during stress or injury — a key lesson for researchers developing animal models to study human blood diseases.

“Our results more broadly suggest that for the blood system, the processes of homeostasis and regeneration are distinct,” Chute said. “Better understanding of the cells and mechanisms that control stem cell recovery after injury will move us closer to generating blood-forming stem cells to fight disease or regenerating blood-forming stem cells in patients.”

The research was supported by the National Heart, Lung, and Blood Institute; the National Institute of Allergy and Infectious Diseases; a California Institute for Regenerative Medicine Leadership Award; and a Damon Runyon Fellowship Award.