$11.4 million grant will help to advance work in prevention, detection and treatment 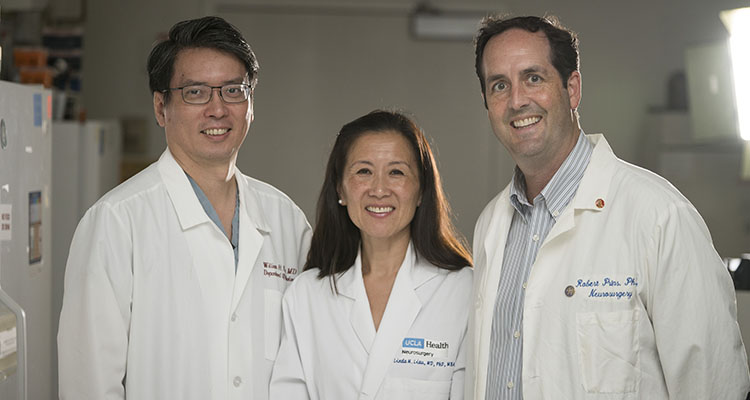 The brain cancer program at UCLA's Jonsson Comprehensive Cancer Center and the UCLA Brain Tumor Center has been designated a Specialized Program of Research Excellence, or SPORE by the National Cancer Institute, making it one of only five brain cancer programs nationwide to receive this national recognition and substantial research funding.

The designation comes with an $11.4 million, five-year grant that recognizes UCLA's brain cancer program as one of the best in the country. The program supports research into the prevention, detection and treatment of one of the most lethal and deadly cancers, which often receives far less funding than other types of cancers.

The SPORE designation is the second for the Jonsson Cancer Center. In October 2002, the prostate cancer program was designated a center of research excellence, and was renewed in August 2013 for its third five-year funding cycle, receiving an $11.6 million grant from the National Cancer Institute.

These grants promote cooperation among scientists in different disciplines, and UCLA’s program will partner researchers and clinicians to translate basic research from the laboratories into patient clinical trials much more quickly and effectively, said Dr. Linda Liau, professor and chair of neurosurgery at the David Geffen School of Medicine at UCLA and director of the UCLA Brain Tumor SPORE Program.

“We now stand at the beginning of a paradigm shift in how we understand the biology of brain cancer, and can develop more effective methods of prevention, diagnosis and treatment based on our new scientific understanding of why previous treatments have failed,” Liau said. "The brain cancer SPORE gives us critical initial support and resources to foster collaboration and accelerate new research and discoveries.”

Dr. Michael Teitell, director of the Jonsson Cancer Center, said the grant is "a superb example of excellence in interdisciplinary research at UCLA, and it will allow us to have a major impact on the way we attack brain cancer. We can now bring a multifaceted approach to the disease, to find it early when it's more treatable, identify specific immune and genetic therapies, and bring these observations in the lab quickly to the clinic so we can help those who are fighting this disease every day.”

The American Cancer Society estimates that 23,800 malignant primary tumors of the brain or spinal cord will be diagnosed this year, and 16,700 people are expected to die from the disease this year.

UCLA's program will work to unravel the genetic mysteries of brain cancer and develop new and better ways to detect and treat it. Four initial key projects will form the core of the program:

“The SPORE designation will build upon our already successful and nationally recognized brain cancer program,” Liau said. “We are tremendously grateful for the support from the National Cancer Institute SPORE program, UCLA's Jonsson Comprehensive Cancer Center and the UCLA David Geffen School of Medicine.  Together, we look forward to making vital new advances in developing new therapies for brain cancer and improving the lives of people with this disease and their families."