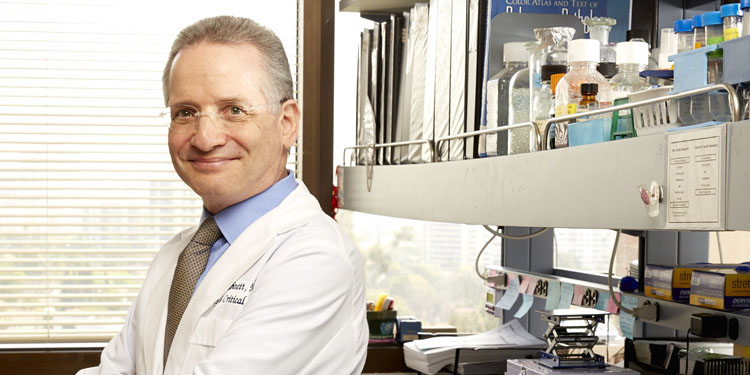 UCLA scientists have discovered a dendritic cell vaccine that amplifies the response of the immune system in people with non-small cell lung cancer (NSCLC), the most common form of lung cancer. The study, which is the first to test the vaccine in humans, has important clinical implications as the method could boost the cancer-killing power of anti-PD-1 immunotherapies that are currently being evaluated in NSCLC and other advanced cancers, which are very difficult to treat successfully.

Immunotherapy using anti-PD-1 antibodies has revolutionized the treatment of NSCLC and many other cancers. The therapies work by targeting the protein PD-1 that, when it binds to another protein called PD-L1, can protect cancer cells from immune cell attack. Anti-PD-1 treatments block this interaction, thereby unleashing the patient's immune system to fight the cancer and arrest tumor growth.

However, two conditions are required for anti-PD-1 therapies to be effective. A baseline level of PD-L1 expression has to be present in the patient’s tumor, and a type of “killer” T cell, called CD8, must also be able to infiltrate the tumor and attack the cancer, said Dr. Steven M. Dubinett, Chief of Pulmonary and Critical Care Medicine at the David Geffen School of Medicine and lead author of the study.

“Immune checkpoint inhibitor therapies such as anti-PD1 are among the most important recent advances in the fight against lung cancer but the majority of tumors still do not respond to these treatments, and attempts to develop vaccines to boost the immune response in these patients has so far not been effective,” Dubinett said. “The results of this study are promising, as this vaccine has the potential to combine with other immunotherapy treatment strategies for NSCLC that boost the immune system’s recognition of the tumor.”

The new study builds upon a more than ten-year ongoing UCLA research effort by Dubinett and his colleagues, focusing on using a patient’s own dendritic cells, which are cells of the immune system that process antigen material. The team used a replication-deficient adenovirus to infect the dendritic cells and prompt them to over-secrete a protein, the chemokine CCL21, which attracts more dendritic cells and CD8 T cells into the tumor. Pre-clinical studies showed that the protein stimulated the immune system to recognize and attack the cancer cells, potently inhibiting cancer growth.

The UCLA team hypothesized that by administering an adenoviral dendritic cell vaccine that expressed the CCL21 gene, they could restore CD8 responsiveness and increase PD-L1 expression in the tumor microenvironment, thereby extending the effectiveness of anti-PD1 therapies to more patients with NSCLC and potentially other cancers.

In a Phase I clinical trial, the CCL21-DC vaccine was administered directly into the tumors of 16 patients with NSCLC, in two doses, approximately seven days apart. The UCLA scientists then compared pairs of tumor samples from each patient, taken on the day of vaccination.

The results showed that 25 percent of patients had stable disease (meaning their tumors did not increase or decrease in size) at day 56. Infiltration of CD8 cells in tumors was activated in 54 percent of patients, and a significant increase in PD-L1 expression was also seen in patients following vaccination. Side effects were manageable, limited mostly to flu-like symptoms, nausea and fatigue.

Lung cancer is the deadliest cancer worldwide. The American Lung Association estimates more than 158,000 people in the United States will die from the disease this year alone, and NSCLC accounts for approximately 85 percent of all lung cancers.

These new findings can help to better identify people who stand to benefit from this approach, and lead to the development of new and improved treatments for NSCLC and other cancers. Future studies will evaluate the effectiveness of the CCL21-DC vaccine when used with anti-PD-1 immunotherapy, as well as in combination with other potential treatments, Dubinett said.

FUNDING
The research was supported by the National Cancer Institute, the National Institutes of Health, the Thoracic Surgery Foundation Research Grant and the VA Clinical Merit Grant.